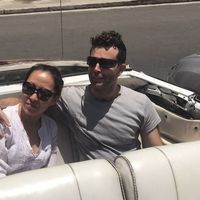 NOTE: If you speak any of the languages I'm learning, or Chinese or Spanish, please mention this in your request, as I'm always looking for opportunities to practice existing languages and learn new ones.

To facilitate the arrival of The Bright Green Mothership in East Asia, through linguistic, musical and cultural exchange

An expatriate pirate, a straight shooter, funk soldier and all-round gentleman in the Orient, I believe in human synergy and soul power (the music category, not the spiritual being).

Don't be put off by my perceived wealth of CS experience and recent lack of hosting references - it's not that I don't want to host; it's just that we get very few quality requests. I find that a lot of CSers get choosier after they've hosted lots of people. To a certain degree this is true for us also, but I'm not one of those people who needs you to stroke my ego and tell me what a deep, pre-destined connection we have before you surf my couch. All I ask is that you
1) get my name right
2) use the Couch Request button (this shows that you know how to use the website)
3) make an effort to have a complete profile. A word of advice here: the less references you have, the more I'll rely on your profile to make a decision. So a half full, just-joined-yesterday profile and a cut-and-paste request letter won't make the grade.

"He (mankind) is not only a product of the universal process of evolution, but capable of affecting the process which has produced him, and of affecting it either for good or ill. His true destiny is to guide the future course of evolution on earth towards greater fulfilment, so as to realize more and higher potentialities". (from an essay by Sir Julian Huxley, a prominent 20th century Humanist)

"We are on the verge of a new evolutionary transition, so let's get to it. The global superorganism, a merging of technology, culture and the biosphere, is already visible in outline and our immediate destiny is to help it into being. The enlightenment project is alive and well and will be realised through a grand synthesis of information technology, biotechnology and global systems. Transcendence is still on the cards, but it is transcendence for materialists." (from the answer to "What is Life About?", which is a chapter from the book "Big Questions in Science", paraphrasing the views of Californian futurist Gregory Stock)

That human potential can only be realised by cooperation, and that this cooperation is naturally synergystic (and the converse being that working against each other is naturally destructive), and that the individual and society are harmoniously interrelated; the improvement in the condition of one results in the improvement in the condition of the other, or in other words:

"Not my problem" is not a philosophy. It's a mental illness. Right up there with pessimism. Other people's problems are our problems. If your neighbour is laid off, you may feel as if you've dodged the bullet, but you haven't. The bullet hit you as well. You just don't feel the pain yet. Or as Ruut Veenhoven told me: "The quality of a society is more important than your place in that society". In other words, better to be a small fish in a clean pond than a big fish in a polluted lake.(from http://sivers.org/book/GeographyOfBliss)

"We are one species. We are star stuff harvesting star light" - Carl Sagan

That this natural synergy therefore defines what is "good" and "bad", "right" and "wrong", NOT any kind of higher being or religious text, and that meaningful existence and happiness is derived from realising one's own potential, and in helping others, and society in general, reach theirs, in this life, NOT in any kind of afterlife (also see "The Happiness Curve" below).

For more information, see http://www.americanhumanist.org/humanism/
and read The Humanist Manifestos II and III

and this one with David Deutsch:

1.a very pleasurable experience
2.to please immensely
3.to be affected with pleasurable excitement
4.in perfect functioning order
5.a situation or an activity that one enjoys or to which one is especially well suited
6.to react or interact harmoniously and in a synergistic manner
7.medium by which funk emanates from the Mothership

3. The Happiness Curve: I'm working on a theory about the meaning of life being the optimisation of the integral of the happiness curve (ie happiness versus time, or h(t), where h is an arbitrarily defined "happiness level"), over the length of one's life (ie, the total area under the h(t) curve represents the total happiness in one's life, and it should be maximized), but the problem is, you don't know when you're going to die. To get around this, you'd have to simultaneously optimise the rate of happiness increase (dh/dt) and the current value of h(t) at any given point in time, in addition to the original integral. So basically you end up with one helluva numerical methods problem (or perhaps the principles of PID control could be applied here?), and I haven't taken math since second-year University. Maybe I should take up a religion after all...

"Success is a peace of mind which is a direct result of self-satisfaction in knowing you did your best to become the best that you are capable of becoming." - John Wooden

4. The connection between minimalism and sustainability: my interest in all things "green" was recently piqued after teaching a course about the environmental effects of engineering activities. After watching a lot of videos and reading a lot of articles about global warming, the lack of sustainability inherent in our current lifestyles and systems, clean energy and green technology, I came to this simple conclusion: the best way to reduce your ecological footprint is to buy less stuff. Only buy stuff that you will use, and re-define your needs and wants so that you buy less stuff in the first place. This also helps you to step off the consumer treadmill, and save more money, so that you can have more time for things like travel (and money left over to offset your carbon emissions from all that travel!). See www.storyofstuff.com and quotes from Henry David Thoreaux for more information. Also the Zeitgeist project, the Venus Project and the book "Early Retirement Extreme" for advanced students.

Continuing to host people when I can, building my Couchsurfing karma in preparation for my next vagabonding stint...

Wrote an article about Couchsurfing in Map Magazine (March 2008), a Nanjing City Guide

Have Couchsurfed in Guangzhou, Zhuhai, Macau, Bangkok, Penang, Cameron Highlands, Kuala Lumpur, Paris, Dijon, Marseille, Amsterdam and Brussels; Chieri, Bergamo, Salo and Trieste (Italy), Postonja (Slovenia), Budapest, Szeczin and Gdansk (Poland), and even at a Ryanair Flight Attendant sharehouse in a small village 15 minutes walk from Frankfurt Hahn Airport in Germany (gentlemen, don't get jealous, my host was a male), as well as (closer to home) Bli Bli (Australia) and a bunch of wonderful places in New Zealand. And also, Nanning, China, on our way to Vietnam. After our Euro 2012 trip we've now added Poznan (Poland), Kaunas and Trakai (Lithuania), Kremze (near Cesky Krumlov in the Czech Republic), Banska Bystrica (Slovakia), Malyi (near Miskolc, Hungary), Varna (Bulgaria), Patras (Greece), Rijeka (Croatia), Udine (Italy), Gironico (near Como, Italy), and Echterdingen (near Stuttgart) to that list. I also Couchsurfed for a night in Doha, Qatar; probably my most unique CS experience yet! 2018 update: have also surfed in Xishuangbanna, China, Nong Khai, Thailand, and Jiayuguan, Gansu, China, Atherton, Australia and Marinha Grande, Portugal.

We've also hosted many CSers in Nanjing and Shanghai (and a handful in Zhuhai) - see references for more details!

I also initiated a CS gathering in Guangzhou and attended several CS gatherings in Bangkok during my first Couchsurfing trip in January/February 2008. We recently (January 2018) had a CS Guangzhou 2008 reunion.

Before CS, I surfed many couches around the world, from Brisbane and Sydney to Bolivia, Spain and China, but all were either people I knew, or at least people who were referred through people I knew.

Music (bass, acoustic guitar, piano, vox, cowbell(ok the cowbell was a joke), sharing music with people, and playing in groups using the above-mentioned instruments), language study (Chinese Mandarin, Spanish,Thai, Portuguese, Vietnamese, Italian), learning about foreign culture, world religions, and the history of the regions that I travel to, cricket, surfing, tennis, writing, and of course, travel.

Bring tha FUNK - RHCP, Jamiroquai, Lenny Kravitz, Skunkhour, James Brown, Parliament, Kool and the Gang, Curtis Mayfield, Marvin Gaye (apart from his sexual philosophies, I would encourage you to listen to his works "Anger" (from the 1978 album "Here, My Dear" - with it's infinitely wise hook line "Anger...can make you old...can make you sick....destroy your soul") and "What's Going On" (from the 1971 album of the same name) to see that there was so much more to Marvin Gaye than "Sexual Healing" and "Let's Get it On") Sly and the Family Stone, Earth Wind and Fire. The over-arching theme of what I'm into is something I like to call "Cosmic Funk". I'll explain more when we meet :-)

Movies - Bruce Willis - Last Boy Scout, 12 Monkeys. Pierce Brosnan as James Bond. Billy Madison, Wayne's World, Bill and Ted's Excellent Adventures. Rambo II. I've recently become a fan of the "old guys coming out of retirement and kicking ass" genre, for example Clint Eastwood in Gran Torino, Michael Caine in Harry Brown, Liam Neeson in Taken, Bruce Willis in Die Hard 4 and Red, and of course Sly Stallone in Rambo IV and The Expendables. I always enjoy watching Jason Statham kick ass, even though all his movies are the same. I recently cried at the end of Die Hard II. No joke.

Books - looking for classic, simple, Spanish books to read. As for other stuff, I have a "to read" list as long as my arm. Also have plans to branch out into other latin languages, starting with a Portuguese book, when I next manage to find a chunk of spare time.

Donating my Air Force-Issue aviator sunglasses to George Clinton (surviving leader of the funk movement and grand poobah of the Mothership) during a concert at the Enmore Theatre in Newtown, Sydney, March 2005. I forced my way to the front of the crowd, held out my offering, and the great man (who was wearing a P-funk All-Stars mu-mu and pink, star-shaped sunglasses) reached down and took them. As soon as his hand touched the frame, I could feel the energy of the Mothership channeling through the aviators and along my arm. He wore them for a good 20 minutes during the encore, and as he left the stage, I could see him clutching them in one hand as he waved to his funk-enlightened minions. I took that as a sign, that as a disciple of James Brown (may he rest in peace), and an ambassador of the Mothership, from that day on, I should go forth and spread the funk, setting free the souls and asses of those who have not yet found the groove. As the title of Funkadelic's 1970 album says, "Free your ass and your mind will follow"...or was that the other way around? Either way, both versions make a powerful statement. Think about it.

I can teach you a bit of music theory, guitar, bass and modern piano basics. I'm very interested in language exchanges (ie I help you with English, you help me with Chinese or Spanish), particularly Spanish. You'll also get lots of "skoolin" from my music collection, if you're so inclined.

See "Teach, Learn, Share" above. Plus lots of interesting travel stories from around the world, someone to share a drink with, help with the cooking and doing the dishes (should be a given, right?) and of course I always bring along plenty of local wine or beer, if you like a drink!