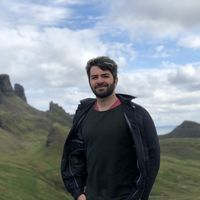 - I live in a 4 story house in the center which is a listed national monument
- Not more than 1 person
- Smoking tobacco is not allowed (Pure weed, mushrooms and everything else can be alright)
- Not more than 3 nights (mostly even 3 is too much, unless you are very interesting)

I live for knowing more..
Everyday I just expect to experience something new and hope to feel that I'm wiser than yesterday..
&amp; I don't like boring people. Just a waste of time to be around them. So, be fun!

I met &amp; surfed with many couchsurfers while I was travelling and had amazing experiences. Also hosted many people as you can see from my friends and references..

Travelling, one day I want to leave a mark on every country. Be in so many places others haven't been..
Books, reading while travelling, while raining..
Theatre, used to act, now just watching..
I also like to party and karaoke. On weekends and sometimes during the week you can hear me saying ``Let's go to karaoke or let's go to this techno party``
If you want to discover the secret night life of Amsterdam, I am your guy ;)

Books:
Nietzsche, Yalom, Albert Camus, Jean-Paul Sartre, Kafka..
Orhan Pamuk, no one can feel Istanbul like him..
Elif Safak, she has her own way with words..

Music:
I used to play the drum, lately just listen to music..
The Beatles, wish I could ever watch them live..
Daft Punk, the XX, Chet Faker, The Strokes, alt-J &amp; many more..

Moving alone to Istanbul when I was 11 years old.
Having an interrail trip by myself through Europe when I was 16.
Surviving in New York for 5 months, working for Greenpeace.
Having a tattoo with the digits of Pi, all representing another victory in my life.
Travelling 50000km's in one month.
Celebrating Balinese new year with Balinese.
Saw a double rainbow in Coron after surviving a heavy rain in an old wooden Filipino boat.
Living on a houseboat in Amsterdam.

This ones tough..I think I'll answer this later..
or just come here and we'll share it together :)

Good stories and my toothpaste :)