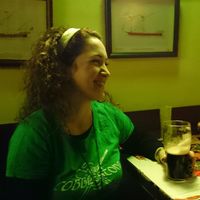 CURRENT MISSION
Traveling, discovering new things and meeting with some interesting people around the world!

I like traveling, eating, drinking and dancing!
I visited a lot of cities and countries in Europe. Also I lived one year in London and one year in Innsbruck. Now I am living in Berlin.
My plan in the near future is traveling to Latin America!

Because I believe we can make new friends and help each other via CS.

Changed some children's life with my EU project!

I can share my knowledge about good food spots in Istanbul.