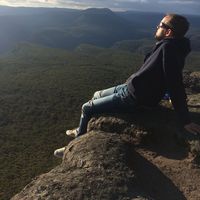 After travelling around the world (actually I've just been to 6 countries on 3 continents) for one year I'm back in Austria since September 2015. I got a new job, took some courses and finished my BA degree. In September 2020 I moved to Vienna in order to get prepared for my (current) dream job.

Hey folks, it's me, Bernie, born and raised in Upper Austria. After I got rid of my old job and finished evening school I decided to travel around the world, now as it's over, I'm back into business again.

There's so much to tell about me and my travels, if you'd like to know, feel free to ask.

I'm living in a 2-room apartement in a quiet and safe area. Grocery stores and other shops are in walking distance, also there are a few nice restaurants/inns around.

I believe that couchsurfing is a great opportunity to meet awesome people from all around the world which may become lifetime friends.

I've surfed several times during my trip around mother Earth, I met awesome people and friends via Couchsurfing and I enjoyed every single moment of my surfing period. Now as I'm back home I want to return to favour.

Nearly every kind of music as long as it's good, I like good movies of all genres, except those horror movies. If I got some sparetime (which is hardly ever) I like to read a book about history, politics and real life stories.

I can teach you some Austrian slang, how to cook really delicious food and have a good glas of wine or, if you're into Scotch, share a good whisky with you.

Some nice Austrian dishes, loads of stories from my journeys, a good chat and a real good time.