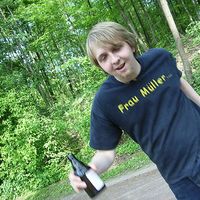 I just moved to Freising.. And I don't know a living soul in the area. So I am currently looking to meet people to spend my time with.

I guess you could call me the average nerd... I like computer games, fantasy books, rock music and beer... I actually understand the sience jokes in shows like "the Big Bang Theory" and I do find them funny (back when that show was actually funny... früher (tm)).

I dress comfortably and unremarkably rather than in up to date fashion.
I grew a beard mostly because I was too lazy to shave... and then at some point decided to simply go with it.

I used to work at a campus radio station. Probably the best and the worst thing i ever did was to join that radio station... A lot of fun and beer... and a lot of time i should have spent studying.
I did host a show every week... nothing serious... but i am told that the people who listened to it had good time. That's more than i had hoped for... ;)

More recently I picked up pen&amp;paper role playing games. I did not expect something could be that much fun... be a fulfilling pastime and still be so easy to do. Even more recently I have started painting miniatures for use in tabletop games... I'm not winning any prizes yet... but I do like what I am doing.

Spent one legendary night in Glasgow... that's why i signed up!

Attended the MADCHESTER INVASION 2013 and survived!

Met a great person from Mexico who could not even host me... but suggested to go for a drink anyway...

I never had a bad experience with CS!

Movies: There is loads of good Movies... my favorite one would be "Gattaca"

Done: I once sang "My Heart Will Go On" in a punkrock-club.

Seen: I was walking through a small town in Ireland. And suddenly without any discernable reason someone took out a guitar an began to play. And people passing by would just stop and begin to sing an dance in the middle of the street.

Other than that nothing special... We can hang out, chat, cook together... I am usually up for a hike or a beer (if necessary at the same time)