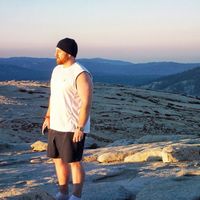 to see the world, and show other people mine

I am a college graduate and world traveler. I've spent 2 summers backpacking through Europe, as well as a month traveling up the eastern coast of Australia. Other than that, I've spent most of my time in California. I love meeting people from all different cultures and backgrounds and learning about the world. I try to spend as much of my winters snowboarding as I can..
I just started a new job in finance here in South Lake Tahoe, working the 9-5 and traveling as much as I can during my time off.

Do what you can now, and what you have to later.

I've hosted multiple groups as well as solo travelers, and hope to stay with people when I get to travel again.

Hosted someone and their friend for a night, last minute. I already had friends in town so there weren't any beds or couches available so they crashed on the floor but seemed very grateful and respectful. I've also hosted a few solo travelers who were very fun, interesting people.