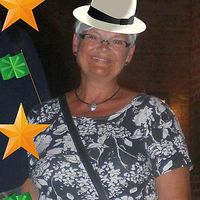 My mission is to enjoy life, and try to make the world a better place to stay. Although I’m getting older, I’m trying to live my dreams. Mark Twain has said many wise things, here is one of his pearls: “The secret of getting ahead is getting started” 🍀😊♥️
Another important one (especially for women):
“With courage you will dare to take risks, have the strength to be compassionate, and the wisdom to be humble. Courage is the foundation of integrity.”

IF you are new on CS, learn from this clever guy: https://brenontheroad.com/couchsurfing-101/

I am an old happy, funny and friendly woman, who is trying to get the best out of life. I'm not sure if there will be a life after death, - but everyone should most certainly work for a good life for everyone, as long as we are here on this beautiful planet!
After working in public healthservice for many years I'm now retired. I do very much like to travel and to meet new, interesting people - be wiser about different culture, and how people managed their lifes.
I have got 3 daugthers, who all have been travelling around the world, and brought some fine experiences back home. Now I would like to provide some good experiences to other yuongsters or elderly traveling people - and hopefully I'll get something positive myself.

Don't take anything for granted - pay it forward!
What does'nt kill you, makes you stronger! Some might think that it's a phrase.........it is NOT I've been there!

HOW I PARTICIPATE IN COUCHSURFING
As host and surfer.
October 2012 we were some CS-friends planing a meeting at my place, for CS's from all over the world, - to share our experiences AND the joy of cooking together. It was very succesful and I learnt about many exiting experiences that others have had with CS....AND got nice, new friends :0)
Update May 2015: a couple of those youngsters have now become my close friends, and we did travel together to Hungary and Romania and also to a CS event in the Netherlands.

This blog tells important things for all Couchsurfers!

Since I became a member in january 2012 I met some interesting people at a CS-meeting in Flensburg. After that I've got a really nice friendship with some youngsters in my city, - foreigners as well as danish - and it has been a great pleasure.

😎 THE FOLLOWING IS MY CS DIARY, YOU DONT HAVE TO READ ALL OF IT ;-)

I'm interested in other people all around the world, and how they managed there lives. I like walking, biking and swimming in the nature, and to share fun, laughter, conversations, and of course food and drinks. I care for animals, and love my boyfriends two dogs!
I love dancing - especially the old, danish folk dances - but also more modern types, and traditional dances from around the world. Gardening and flowers are my hobbies, and I like to visit ART- exhibitions and different kind of museums. I also like to spend time on my bike in the nature, and am in a group of trash-collecting people here in my village. Reading books are vital - although I also watch boring TV :o)

All the good, new danish movies. And some good foreign too, as long as they don't have all that car hunting stuff!!! Many different kinds of music - but most of all folk, jazz and soft rock. Classical music for relaxing and meditation. Music choise depends very much on my mood, - when cleaning I love Credence Clearwater Revival, Bruce Springsteen, Oister Band. When cooking I like listening to documentary radio and pop music - when relaxing Mozart, Albioni, Bach....a.s.o.

Well...until now....one of the most amazing thing I've seen and experienced was Doubtful Sound in Fiordland NZ. Incredible silent and untouched nature!
I still feel that the most amazing thing I’ve done was to walk the Camino in Spain 2004. First time ever that I planed and traveled all alone, and walked on my feet 800 km with a backpack, while I looked back on my life and my divorce!
January / February 2013 I went to Nicaragua on my own for 6 weeks - a trip that I'll never forget! Poor country but really, really nice people.
I've traveled Greenland in 3 weeks from the Ice Fiord north of the Polar Circle and all the way down to the southern part, where the wikings discovered this totally beautiful country!
Of course - given birth to my three daughters was exceptional - and to see them grow and create their own families makes me happy!! :o)

I know a lot about nursing, hygenic, medicin, healthy food and rehabilitation - since I have been working at a hospital for more than 30 years! I'm interested in art, plants and flowers, nature all over. I love music, to sing, to dance and want to learn more.
If someone is able to teach me how to play guitar or block flute - I would love it!!

A smiling, helpful, friendly, considerate and polite attitude :o)
Lots of stories, lauhgter and fun.
Small gifts.... and maybe cook a nice meal for my host.... if they like!?