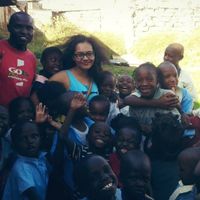 I have one mission: To be a better person.And my mission will fulfill when i can met with the peoples around the world.Spread the joy and happiness.And make the world peace.

i grew up in Solo, a small town in Central Java Indonesia which is a beautiful country with great people. i love meeting new people, water fights, cheesecake, reading, politics, bikes, good food, fine wine, even better company and conversation, music (from rock to jazz, irish folk to whimsy indie), practical jokes, singing in karaoke (badly),comedy, travelling and generally collecting items for the memory bank. i strongly believe in human nature and that as long as fun is being had then all is well. i just want to have as many great times as i can.

Be brave. Take risks. Nothing can substitute experience...

I discovered Cou8chsurfing and its changed the way I travel and see life.
I've been travel and live to another cities and another part of Indonesia, Couchsurfing is a great community everywhere i go.

Exploring unknown territories
with drawing
on foot
motorcycle
train
boat
airplane
imagination
my pen
whatever gets you there...
:)