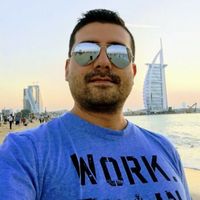 I'm from Colombia but have lived in the US since 1998. I lived in Orlando, Atlanta, Birmingham, Mobile, Durham, NC, Charleston, SC and now I live in Raleigh, NC. I love traveling and meeting lots of people from diverse backgrounds.

Carpe Diem et Carpe Noctem!!!
Do onto others as you wish they'd do onto you.
Work hard and play even harder.
I enjoy the small things in life. I try to take a trip whenever I have some time off. I am frugal on my daily life so I can do the things that really matter to me (like traveling).

"To argue with a man who has renounced the use and authority of reason, and whose philosophy consists in holding humanity in contempt, is like administering medicine to the dead, or endeavoring to convert an atheist by scripture."
Thomas Paine, The American Crisis

I have only had great experiences, but the best ones have been when I have met many people through my hosts; Rio de Janeiro, Sao Paulo, Ljubljana, Gent, Orlando, Kuala Lumpur and Hatay jump to mind.

I cherish diversity. I really enjoy traveling, but I like to travel off the beaten path. I like to see the places I visit from the eyes of the natives. There is a lot to learn from others. I can't live without music and I enjoy listening to music that I cannot understand; I prefer soft music.

Music: I absolutely love music. I learned English by learning the lyrics to my favorite songs. I know a little Italian because I listen to Opera, I am learning German because I found a German musical and I can't stop listening to it. I love anything by Jim Steinman, Meat Loaf, Queen and especially Freddie Mercury.

Books: Plato's Apology, Brain Longevity, Rich Dad Poor Dad. I don't really read much, but if I read I want to derive some benefit from my reading.

I have delivered babies. I have met the most amazing people though my travels and I have learned to adapt to just about any situation.

The main purpose of my trips is to create long-lasting friendships and to meet cousins around the world. I’ve met over 760 cousins in person. I've stayed in touch with many of my hosts and I enjoy talking to them and plan to meet them later in life. I have met many foreigners in the USA and have visited them in their countries later.

"Education is what remains after one has forgotten everything he learned in school." Albert Einstein

"A human being is a part of a whole, called by us _universe_, a part limited in time and space. He experiences himself, his thoughts and feelings as something separated from the rest... a kind of optical delusion of his consciousness. This delusion is a kind of prison for us, restricting us to our personal desires and to affection for a few persons nearest to us. Our task must be to free ourselves from this prison by widening our circle of compassion to embrace all living creatures and the whole of nature in its beauty." Albert Einstein

I can teach Spanish, and some medical related things. I love board games and other geeky things. I am always up for talking about similarities and differences in education, health, economics, and politics between two countries.