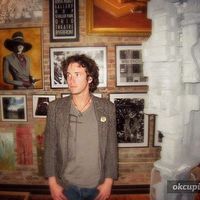 What can I say about myself, I'm a conundrum wrapped in a enigma, sprinkled with riddles and covered in a spicy mystery sauce. Much like a Taco Bell Enchilada, except I'm not nearly as bad for you and I won't give you gas.

I live in Two story Condo and Co-host Surfers with my Room Mates, Levi 27 and Luke, both of whom are gay and my cat Biz. You can check out Luke's profile here (If he ever fills it out.....):
https://www.couchsurfing.com/people/nicknameguy

LOCATION:
My Condo is off Henderson Rd. Near UA. It's about 15 minutes from Campus and 20 minutes from downtown by car. And there are 3 bus lines within 2 blocks of us. Here's a link to our Actual Location:
https://goo.gl/maps/skvBdCByXMF2

ACCOMMODATIONS:
I Can Host 4-5 People At A time........ I've got furnished room in the basement with two futon mattresses in it. An Unfurnished Laundry room with a spare futon mattress. and I've Sectional Couch that can fit 2 people and a normal couch that can fit one on the first floor. If I decide to host you then you can pretty much take your pick of any of those 6 options.

Now i am Hosting Couch Surfers.

I relied a lot on couchsurfing when I was traveling. Both by using this site and sometimes couch surfing with random people I met while Hitchhiking. Now that I'm settled back home I want to help pay it forward by hosting people.

-Philosophy
-Adventures
-Drinking with friends and the occasional stranger

First time in Yang Shou and every time after.

There are more but I have to think

Lessons in life are repeated until they are learned.