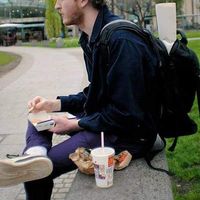 I'm Rob. I started couch surfing when i was 19 and had a flat in Liverpool. Instantly loved it, it's great trusting people and I've met some really inspiring friends through here.

I've been living in Edinburgh for a while following an extremely restless period. I'm starting to get restless again, but I still love it here. I'm building up some skills and funds then i'm going adventuring again.

I love spontaneous and obnoxious people, people unafraid of who they are, eccentrics, people with a chequered past, creative people, open people...I like to drink, but not as much as I used to, I try new things whenever I can, I like going on trips with people i've just met.

i try to change my routine as often as i can.

I haven't lived outside of the UK properly, but i have spent a fair amount of time in the United States, Canada, Spain, France, Germany and Poland and loved getting into the routine of inhabiting a foreign city for some weeks.

What else...i can be a messy and disorganised person, so if you are a neat freak you may prefer to stay somewhere else. I try to pack a lot into my life, so sometimes cleaning can fall down my list of priorities. If it didn't, i wouldn't be able to host so many guests!

I'm an atheist but am tolerant of other peoples beliefs, as long as they themselves are tolerant of the rights of gay people/women/other religions etc. If you believe gay people deserve to be demonised and punished i would prefer you didn't ask to stay with me. Same applies to racists, sexists, xenophobes etc. All else welcome!

Also i am a regular cannabis user and believe in cannabis legalisation. Of course as a guest you do not have to smoke with me, but i would appreciate it if you didn't whine about my harmless habit in my home...

If you do want to smoke with me, that's cool too!

Don't complain, don't be fake, try not to be patronising or sarcastic and try new things. Don't assume you know everything or that you're the smartest person in the room. When you feel looped, break it. Eradicate hate and build tolerance, compassion and understanding, and hopefully we won't end up killing each other in the tens of millions again like our grandparents. And have a laugh!

Oh, also cycle. We should cycle more. The UK should invest heavily into cycling infrastructure. Cycling is fucking free, it elongates your lifespan and its continued use doesn't threaten the future of humanity. No one ever started a war so that we could keep cycling.

Don't get me wrong, i enjoy the occasional drive, but it should be treated as an occasional luxury, not a daily necessity. The Bicycle Will Rise Again!

I have hosted a TON of people...

I've surfed a few times, I will surf a lot more in the future...

I have volunteered on the Mull of Kintyre, doing environmental work in the thunder and rain, sleeping in a large charming log cabin with no electricity. I found out about that through CS...

I took up a very kind German CSer on his offer to give me a free ride from Rosyth to the German/Dutch border...

When not surfing in other places, i check their boards to find out what's going on. Last time I was in Berlin for example, i found out through CS about a short film that needed extras in exchange for booze, that happened to coincide with my 25th birthday. That was a good day, from what I can remember...

so yeah, I participate as much I can. This site's a part of my life.

Through the site, i've hosted over 100 people, all decent folk who I'd like to meet again. Outside of the site, several hundred nights of sleeping on other people's floors, settees, armrests, kitchen surfaces, bathtubs and the like. Park benches! You know you're travelling when you have creaking back pain and are sleep deprived.

If you're a musician or artist or something like that i'll likely want to host you if you're free. Likewise if you offer to make me food or bring me something nice from your home country. If you just message me with the bare minimum looking for a free place to stay i'll probably ignore you. Your stay will cost me time, effort and money and I don't want to be inconvenienced/out of pocket just to help an entitled spoilt kid save a few pounds.

Movies...The Master, The Shining, Naked, Ghost World, Pineapple Express, Stalker, A Woman Under the Influence, Stroszek, Taxi Driver, about a hundred thousand others...

here's some playlists i've compiled as an example...

A meal, some stories, media recommendations, perhaps a drawing? And gratitude of course!