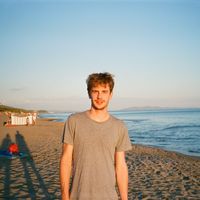 I'm not a very loud person, but not at all a shy one. I like people who can also laugh about themselves, and I like spending time with active people who are always up for funny things to do. And I like making silly jokes - listening to them is a good thing too.

I'm open for all kind of stuff and try to see things not too serious but always with respect.

I had the first couchsurfing experiences in summer 2010 in Ireland, where a friend of mine and I travelled around.

Music, football, futsal, cooking, eating, doing the dishes (hmmmm... not always ;) ), books, coffee and cigarettes, movies, mountainbike, photography (actually I've got a quite good camera, I just forget to use it much too often), playing chess, mountains, newspapers, snowboarding, billard, tabletennis, my frisbee, my friends, ultimate frisbee, cultural stuff, exhibitions, running, cinema (or watching movies under the sky), going out late, coming home early or the other way round!

I like a lot the Tarantino, Eastwood, Kubrick, Wes Anderson, Woody Allen and Tim Burton (Edward Scissorhands!) movies. Besides films such as Requiem for a Dream, Lock, Stock and two smoking Barrels, Amores Perros, 21 Gramm and - of course - Indiana Jones. Breaking Bad is also really great.

...there is always a book beside my bed - sometimes more often opened, sometimes less often - but yeah, I like to read.

I can teach you how to solve the Rubik's Cube (Bruno's four-and-a-half-min-method). And you could teach me how to solve it faster.

I'd like to learn playing the guitar and want to put some more pieces to my little Spanish and Italian language puzzle, you could bring some! And I'm always up for french conversations to avoid the loss of pieces from my bigger french puzzle which I gained while spending two semesters in Lyon.