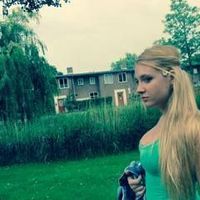 Hello! I'm a spanish girl currently living and working in Ireland as au pair and babysitter. As you can see, I've been a Couchsurfing member for several years but not a very active one cause I haven't been able to travel as much as I would have liked to, but I did manage to live abroad for a while during this time: England, Netherlands, and now Ireland.

This little irish adventure has filled me with joy and hope, I feel alive and I think it's time to go back to that promise of travelling and seeing as much places as posible that I once made to myself.

So mostly I'm interested in travelling within Ireland, as I can't be away for more than two days (work), but some quick trips out of Ireland may be plaussible (not often though)

I'm interested in meeting local people wherever I may go and get to find some travel companion would be ideal too.

- Reading and music are two of my passions. Also cinema.
- I love museums and art galleries.
- I'm a psychology student and mental health is one of my favorite topics.
- I recently got my first DSLR camera and therefore found a new hobby - my initial intention was to only use it for video recording but I ended up finding photography may be my thing (It's an entry-level camera and I only own the kit lens but it's something).
- Just like everybody here I love travelling.