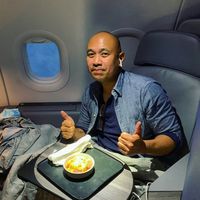 Born and raised in the SF Bay Area. Spent some time in SoCal and Seattle. Living in Vegas the past 10 years.

To learn from others their perspectives on life.

Living in Vegas has given me a chance to explore our beautiful state and national parks nearby. As an avid hiker, I feel that not anyone has a chance to rent a car and drive outside of the city and see what the desert really looks like. If I can show others my perspectives and show them the paths I’ve walked on then I feel I’ve done my job here.

I travel quite often and have also taken Couchsurfers out hiking to the places outside of Las Vegas. I’ve done this in Portland, Seattle, Denver, British Columbia, and also in Spain and Germany.

Anything that involves being outside. I’m an avid hiker yet love the beach. Somewhat of a foodie. Love attending concerts &amp; sporting events.

Too many to list...but we’re all entitled to our own sense of amazing without judgement from others.

Earned airline status at 3 major airlines with one of them having earned 150k miles.

Peaked about 95 percent of the mountains in the Las Vegas area.

Flew in an airplane once a month for 50 straight months(non work related).

Saw 2Pac and Aaliyah in concert(of course this was in the 90s).

I collect postcards and small tidbits during my past travels and don’t mind giving them back out. I’ll share my time if you’re in Vegas and stuck in a bind and need to get somewhere. I’ve done this numerous times for a lot of people in CS who were in some uncomfortable situations.

I’ll be straight up honest: I’m a horrible cook!

I’ve had the most beautiful conversations with fellow Couchsurfers and I feel Couchsurfing is a great platform to share your culture, your personality, your past travel experiences, etc.

Born in the US, and proud of my Filipino heritage. I know a lot about the history of the Philippines and its relationship with Spain and America.