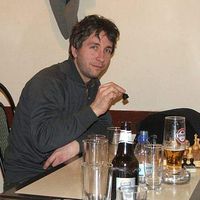 I leave in near to Budapest. I'm working for a German multinational company.
I'm married for eight yeasr ago (like eternity :-) ), and I have two daughters. The biger was born in 2003, the younger in 2006.
My wife is beautician, she works at home, when she pause bringing up our children.
I leave in Budakeszi in an old Swabian single-storey house. It has three flat and once is ours. It is about 60 squarmeter.
There are two floors. The roof floor is only for children.

I like to listen and tell funny stories and interesting facts about diffenert cultures.
I don't like to drink alkohol. (I have drunk about one bottle of wine in my whole life.)
Especially not like to drink in a smoky, dark, noisy cellar.
Instead I drink tap water, juice or coke in a terrace or in bench of a park or bank of a river.

If there are more suicide, there are less suicide.

I don't know while I haven't discovered this community.

I have met nice people in Nürnberg.

DIY, Net, Learn, To get to know everything.

There isn't enough space to write all.