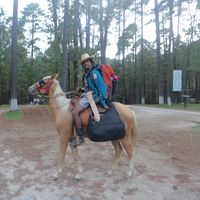 Arriving in Argentina on 6th July, hitch-hike and find 3 horses to buy, then travel on horseback with my girlfriend and our 2 kids, this is the mission for 2018.

Backpacker, travel addict, adrenaline-seeker, ascetic, anti-statist, modern nomad, nature lover who is artistic, charismatic and creative, extrovert, gregarious, understanding, compassionate and upbeat. Some people might also describe me as talkative, impulsive, honest, straight forward, devious, selfish, untidy and maybe silly. But I like to focus on the positives: I am aware of who I am and how I behave. As with everyone, there are times when I am wrong, but I never feel ashamed to apologize.

My full name is Mouhamad-Ajmal ABDOULVAHAB but everyone calls me ‘Mo’. My mum is Indian and my dad is French, and I was brought up in the French colonial region of India. I was impatient in everything from an early age, which explains why I entered University at 17, and started my very first business at the same age. Frustratingly, I had to wait until I turned 18 to establish the business legally. I completed my Bachelor’s Degree in Microbiology at 20 and then went to Paris to visit my dad and settle down. Well that was the plan, but instead I travelled here, there and everywhere I could with friends. I moved to the UK for a 2-month internship, and spent 52 days cycling 2408kms from London to Glasgow via John O’Groats. I would have continued my trip but unfortunately my bicycle broke and my money ran out in Glasgow.

So, I moved to London and based myself there for 8 months, while I kept travelling whenever I could. Despite owing a house, having regular employment, friends and a girlfriend I was often unhappy for an unknown reason. Then one day I watched the film ‘Into The Wild’. It was the catalyst to my decision to sell everything and go backpacking in Dec 2012. I left with a grand total of €151.34. I wasn't sure how long I would last. 8 months later I was still moving and inspired to keep going. I had discovered how much cheaper it can be to travel, than to live in a city. This encouraged me to continue travelling. I funded my travels along the way with seasonal and day jobs such as picking flowers or vegetables in farms, waiting in restaurants, ski station work, admin for hotels/ outdoor centres etc.

My travels have since taken me to more than 50 different cultures - I prefer the word culture to country, as it does not refer to merely political boundaries. I have journeyed across Europe, through Turkey and the Caucasus region, and into Russia, and visited India and Kyrgyzstan. I have experienced the frozen awe of Greenland, cycled and hitchhiked across America, clung to the rockfaces of Colorado and trekked on horseback through Mexico.

My life has been changed forever by the experiences I have encountered on my travels, but it has also been enriched by the challenges I have faced and overcome along the way:

Financial challenges: For example in 2013 when I was robbed in Lithuania and made my way back to my village in France on just €8 for 30 days. In 2014 my girlfriend at the time and I spent our last €50 on food to sell to tourists at the top of the popular visitor’s site in Georgia; Mount Kazbegi. In just 3 days we turned our €50 into €300. Or the time I arrived in Iceland with just ₤3 but left with enough money to fund my next adventure.
Emotional challenges: 2014 In Bulgaria I met Margi, with whom I fell in love, and we travelled together for the next 6 months through Turkey, Georgia and the length of Russia to Finland. After a detour we took independently (to Scandinavia for Margi and to Kaliningrad for me) we met again in Lithuania. But just two weeks into our reunion we broke up in the ‘Tunnel of Love’, Ukraine. How ironic! I continued travelling alone for a month, but I found it too hard, so I returned to the UK in September 2014, visiting my parents whom I had not seen in more than 2 years.

Travel heals: My itchy feet were impossible to ignore so the next stop was Iceland. I had written several emails to hotels for voluntary positions prior to my arrival but nothing had been confirmed, even when I landed in Reykjavik. I got a break as a volunteer receptionist, and my employers liked my work so much they decided to go on holiday and left me to run the place in their absence. - I worked as Assistant Manager for 4 months.
With money in my pocket again I took a one-way ticket to Greenland, where I experienced an Inuit's 85th Birthday party, attended traditional Inuit dancing classes, camped out at -62 C, witnessed the great icebergs of Ilulissat falling, climbed my first overhanging frozen waterfall, went sledding and snowmobiling, and sat in the cockpit with pilots of an Air Greenland passenger plane. These 6 weeks contained some of my proudest traveling achievements. And fulfilled part of the dream I had had to visit Greenland and Alaska.

More highs and lows: After a string of bad luck in Canada, I was contemplating returning home again, got as far as buying the ticket, but later decided to go to Mexico instead. I lost $450 in my indecision, but my journey across America led to old friends in Colorado and lots of climbing. After a single hitchhiking ride got me all the way to the way to Mexican border, I hitched more rides down to southern Oaxaca. Here I met my dream horse 'Feliz': A nearly 3-year-old stallion, a left-brained introvert, who grew up in mountains and was only partly trained, but was very calm and playful. So, I started travelling with my horse, without a penny in my hand, just the hope of finding jobs at touristy places as I made my way down through South America to Patagonia.

After 700km on horseback near the Guatemalan border I met another challenge; extra paperwork to cross the border with an animal. Paperwork which required quite a lot of money so I left Feliz in a farm near the border and flew back to France to work and save money. Whilst staying with a friend in Paris to look for work I met Angie. She found my couchsurfing profile during her visit to Paris and stayed with me, having read that I had travelled on horseback - which was her dream - we were attracted to each other on so many levels. An ideal

life partner with similar interests and passions, and later that year I moved in with her in London.
I spent 4 months in London and earned money to get back to Mexico but when I found out Angie was pregnant, my short-term plans changed. We moved to Poland but after a few weeks living in a small village, Angie and I had several fights and we split up. It felt like my whole world had crashed and I was in dire straits. I returned to London briefly, but after a Facebook chat with one of my friends I was invited to Alaska – with the tickets even paid for me. Once again, I recognized the power of travel as even when I was so down; with my relationship breakdown and the prospect of missing the birth of my child and him growing up, my time in Alaska bought me peace and renewed energy. Thankfully Angie and I decided to work things out and I returned in time to witness the arrival my son IYAN MO MILLI on 3rd October 2016. Since then we have been planning how to return to the horseback trip I started in Mexico, but this time as a family.

My travelling experiences have undoubtedly changed my life with such unique experiences as; seeing my first Tornado on the way to Kalingrad, surviving 4 near death Experiences - surviving an avalanche, solo climbing disaster where I passed out from losing so much blood, living with almost no money, making life changing decisions like buying a $600 horse when I only had $608, 6 awe-inspiring weeks in Greenland, developing my personal and professional skills through the hardships I endured. And this is why Angie, myself and the team have set-up Tours in Expeditions. To share the extraordinary adventures as well as funding our life to keep travelling; The best thing about me is “I Know how to travel adventurously and I can share this with others”
After 2 years of planning, Tours in Expeditions was registered on 17th October 2017. Despite calling ourselves a tour operator, our mission is to share the benefits of adventures with the world, in the same way that my adventures have transformed me. In Couchsurfing, I am here to meet the wonderful people that made me love CS for what it was, after a long time of inactivity in the community owing to the commercial changes in the administration I am back again because I know there are still nice people and I don’t want to miss the opportunity.

I used to love this site, but once it lost what it was for, I am no longer using their service. shame....

I just hope, CS don't disappear like ORKUT from google did.

Well of so many things i've done in this physical world, from owing a business at 18, buying a house in london at 20, sold back the house i bought to backpack around the world at 20 and then, seen so many natural wonders from northern lights, iceclimbing 200kms south of northpole, staying with innuits and mayan decendants in mexico, and so many countries at the age of 24.

Of all these things, the best is, being able to live completely at the present, irrespective of the past or future. Thanks to my spirtual awakening i had from my near death experiance from avalanche. Followed my inner voice and discovered my destiny. Now i am a very different person, that i can barely relate to anyone i have known met or heard of, some say those are what buddists strive for, or path to enlightment. Whatever it is, i am a different person and alone in my way. And would like to connect with others wjo have same experiance, i know that i am not alone, there are others too....and its not that its a must, i enjoy being myself, being unique, as i dont have any problems of anxiety, fear,or depression or anything that normally many of us have. The best of being so is that i can say that my life is awesomenand perfect even at the shittiest time. I mean anytime. I am one with myself.... anyoneone feels the same way? Would love to hear from you..write me

TEACH:
I have good knowledge in Cooking Indian, Fench(Provence-Alps/medeterainain)(Haute-Savoire) (savoire) and Mexican. may be few Italian foods.

Lot of travel Tips, how to earn money on the move, where to look for what etc

I am a.great listener, and I 've been recently helping people to.solve their.emotional.problems... lately it's. Been so many strangers opening themselves up to me and weeping about their sadness. The only help I 've been able to do.is to.listen and get them temporarily out of.their.mind, but want to.learn how to heal people.

LEARN:
My motto is learn anything that is accesible, try it before you deny it. so what ever you can teach me, i will appreciate it.

lucidity, astral.journeys and their.meaning. I 've been blessed with precognition dreams and would love.to.learn more about.it.too...
Also.been able.to heal.myself. and.would.love.to.learn energy healing .(for some of.you I may seem wierd, but if.you experiances what I did, then you would.understand too.
SHARE:
Positive energy: I have a lot of it and sometime i was able to make people around me feel positive as well.
Happiness: I am a happy person and I make sure that everyone near