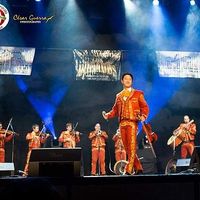 Good vibes, stimulating conversation, and international cuisine are my best friends. I'm independent, driven, and appreciate the simple things in life. I tend to see the best in people, usually trust first, and attempt to not let fear rule my decisions. I value knowledge, self awareness and memories/experiences over tangibles. Music &amp; love are my religions. Music is also my meditation.

To live in, taste, see, be at, feel, talk to, sing with, dance with as many things/people as possible in my life.

To remove all the hate in this world.
To not love anything that can't love me back.
To create a life that I don't need a vacation from.
To help others, see the world, and constantly evolve.
To have common ground with as many humans on this planet as I possibly can.

I'm quite multi-faceted in personality and if you were to ask me how I would describe myself in one word, well, you could call me a "Dreamer", but you know, I'm not the only one :P On top of that, I am very well-rounded and will do all that I can to make others have a good time. I'm also rather short at 5'8". Med labs need to research on growth drugs or pills that actually work (not that I've tried it, :S), please.

My name is Jeffrey and I was born and raised Vancouver, British Columbia, Canada. I'm male, 36 years of age, father to a beautiful 6-week old daughter, and am interested in pretty much all subjects life has to offer. I like music, movies, games, food, learning new things, oh, and to travel, just to name a few. I also enjoy playing squash, reading and composing music when there's nothing else to do, but since I'm bursting with more imagination and creativity than self-discipline, it can be hard to get any of my writings finished. I enjoy meeting new people, and at times tend to just listen and observe until I get to know them. I'm a happy-go-lucky and vivacious person though yet at times, prefer to remain unobtrusive, so most things I do will either be low on volume or through headphones. I enjoy having conversations which involve some degree of thinking. I don't smoke tobacco or otherwise, and I sometimes drink socially when offered (I don't go out looking for alcohol, that is, and I've never actually gotten drunk - update: I'm allergic to alcohol, it seems). I keep tidy, clean dishes after use, and don't intend to pack much. I'm open-minded and usually upbeat, and I love to crack jokes. Oh yeah, I also have synesthesia (a sensation produced in one modality when a stimulus is applied to another modality, as when the hearing of a certain sound induces the visualization of a certain color - in short, I can see colour). The list goes on, and on, and on...

Most people think I'm a bit "nuts" but in the non-threatening nuts-but-you-still-barely-fit-into-society kind of way. I'm nuts in that I always have an awesome time and end up in the oddest situations. Really, I'm a very nice person, and by nice, I mean very considerate, accepting, accommodating, fair.

Before I went out to Japan, I played with the best mariachi band from Canada, Mariachi Los Dorados (http://www.losdorados.ca) from Oct. '08 until May '09. Unfortunately, I was not able to reunite with the group back in August/September of 2009 at the annual International Mariachi Festival in Guadalajara, Mexico where they set the world record for most mariachis performing at the same time on one stage. However, I did get the chance to go a year after that in 2010, and showed the world over the duration of the festival that being from an ethnicity that is not entirely western could also share and form cultural bridges through a language that we humans know as music; mariachi music in this case. After a decade with Mariachi Los Dorados, I've decided to join another mariachi band.

I get along with nearly everyone, regardless of whether or not if you're 5 or 95, short or long, up or down, well-mannered, passionate, smart, opinionated, open-minded, etc., but no matter what, I assure you we'll have a fun and interesting time together.

Oh, should you ever decide on coming out here, please check out this video before you take off (pardon the language barrier, haha): http://v.youku.com/v_show/id_XNDQxNDcxOTg4.html / http://www.iqiyi.com/v_19rrk4uctk.html?spm=a2h0k.11417342.soresults.dselectbutton

"Mind before Action". Or in other words, think before you do.

This one's for CouchSurfing:
ÃÆÃÂ¢ÃÂ¢ÃâÃÂ¬Ãâ¦ÃâAnticipate charity by preventing poverty; assist the reduced fellow man, either by a gift or a sum of money or by teaching him a trade or by putting him in the way of business so that he may earn an honest livelihood and not be forced to the dreadful alternative of holding out his hand for charity. This is the highest step and summit of charity's golden ladder.ÃÆÃÂ¢ÃÂ¢ÃâÃÂ¬?
---Maimonides

(I have seen this attributed to Truman, as well)

23. Music is the pleasure that the human soul encoutners from counting without knowing that it is counting.
-- Leibniz

19. He who joyfully marches to music in rank and file has already earned my contempt. He has been given a large brain by mistake, since for him the spinal cord would fully suffice.
-- Albert Einstein (1879-1955)

17. No man is an Island, entire of itself; every man is a piece of the Continent, a part of the main; if a clod be washed away by the sea, Europe is the less, as well as if a promontory were, as well as if a manor of thy friends or of thine own were; any man's death diminishes me, because I am involved in Mankind; And therefore never send to know for whom the bell tolls; It tolls for thee.
-- John Donne (1572-1631), Meditation XVII

15. My Country, right or wrong" is a thing no patriot would think of saying except in a desperate case. It is like saying, "My mother, drunk or sober
-- Gilbert Keith Chesterton (1874-1936)

14. This above all, to thine own self be true, and it must follow, as the night the day, thou canst not be false to any man.
-- William Shakespeare

13. The gods are amused when the busy river condemns the idle clouds
-- Rabindranath Tagore

11. Necessity is the plea for every infringement of human freedom. It is the argument of tyrants; it is the creed of slaves.
-- William Pitt (1759-1806)

8. All models are wrong but some are useful.
-- George Box

6. That which is hateful to you, do not do to your fellow. That is the whole Torah; the rest is the explanation; go and learn.
-- Hillel (link in 5)

4. Those who would give up a little freedom to get a little security shall soon have neither
-- Benjamin Franklin

3. If a man does not keep pace with his companions, perhaps it is because he hears a different drummer. Let each man march to his own rhythm, however measured, or far away
-- H. D. Thoreau

2. There is nothing so horrible in nature as to see a beautiful theory murdered by an ugly gang of facts
-- Benjamin Franklin

"Why do we travel? We travel to meet people that aren't convinced to know every single attribute of us, we travel to experience one more time the possibilities in our life - anyway there are not too many."

I try to spread the word out as much as I can, and by doing so, I know my efforts can help generate the propensity and provide others the opportunity of seeking the better of hospitality options... which obviously presents itself here at the CouchSurfing Project, duh!

Excerpted from a friend's profile: The golden rule has always been "Take the back roads when at all possible, and never return the way you came." Now that's my style!

If anyone wants to meet to hang out, party, get coffee, have a good conversation, offer up their floor/bed/couch, please don't hesitate to message me. An adventure is always fun when it's not experienced alone (most of the time)!

Cruising in the Spaceship Van on our Atlantic Canada '07 Road Trip.

Cruising the British Isles aboard the Norwegian Jade with my family back in Summer '08.

Cruising in John's red Fiat during the last week of my Ireland '08 trip.

Cruising in the Suzuki Swift on our Iceland '09 Road Trip.

I climbed, along with my brother and a couple other friends, to the top of the Heavenly Capital Peak at Huangshan, the world's most beautiful mountain (and most daring) in the most horrible weather conditions imagineable... and survived!

I see 12:08 (almost) everyday and everywhere I go (time, room number, etc.). Yeah, it has happened time on, time off (more so time on than off) for the past decade :S

Learning to teach, teaching to learn... don't share your work!

Good company and conversation. Knowledge on anything I'm passionate about.