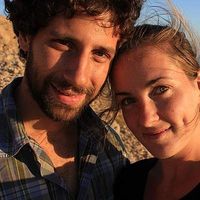 To mix up the monotony of life

I (Ricardo) was born and raised just north of Toronto, ON. I live in Calgary, AB and enjoy the sunshine and the mountains. I'm a very easy-going guy who likes to listen to music, play sports and drink the occasional alcoholic beverage.

My wife, Alysha, is my soulmate travel partner.

Alysha was born in a small town in Northern Saskatchewan, Canada. She moved to Calgary in 2002 to study and is now a Registered Nurse. She is also one hell of a cook.

In 2010 we quit our jobs, sold all our possessions and embarked on a 14 month round-the-world trip. We visited New Zealand, Australia, SE Asia, the Middle East, and South America. We had so many amazing couchsurfing experiences and are looking forward to giving back.

We are now back in Calgary, we have 2 beautiful boys and are looking forward to hosting again. Alysha works part-time now that we have children and I have a fairly flexible work schedule.

Such a big, beautiful world out there...why not see and experience as much as possible?

We both are very outgoing and love to meet new people, so we thought this would be a good idea.

We've lived in Calgary for several years now and know the city and the mountains fairly well.

Come winter, if you're flying into Calgary and then going to Banff, Lake Louise, etc. I could be convinced to take the day off and go snowboarding. It would be a cheap way for you to get to the mountains

Went to Europe in June/July of 2009 and couchsurfed almost the entire time. It was absolutely amazing. Everyone was so nice to us, and we made some really good friends.

We started hosting in May 2009 and have hosted loads of people!

The home birth of our son, Gustavo :-)

I speak english, play guitar and saxophone and know a lot about the fundamentals of taxation...haha. I'm a consultant, so I deal with problem solving a lot. I'm also a good listener and conversationalist.
In the summer if your interested in learning about beekeeping we'd be happy to show our couchsurfers all about honey and beehives!