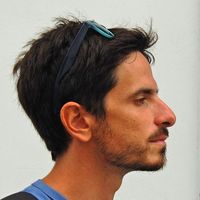 New in Milan, hoping to make new friends!
I'm originally from Rome but I've lived in Germany and in the United States too.
I love meeting new people and sharing stories, food, fun and else with them.

I practise Capoeira and play guitar (badly) and keyboards (less badly). I also like to draw and make videos for fun (when I'm not doing it for work)!

Because it's a great way to meet new friends, share a day or two with human beings and it works!