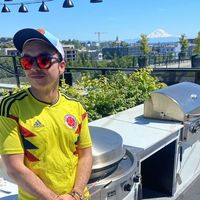 Travel through every single country

Colombian living in the US- I’m a friendly person. I like to hang out with friends and have a good time, I'm open for all new cultures and i like to meet new people and know a little bit more about people on earth.

Live day by day, live the present, forget the past, don't think much about the future. As far as we know, we only have 1 life

I like to show people from other countries my culture and the city I'm living at. I enjoy going to local CS events and hosting and surfing when I can!

Just good ones, did a travel of more than a month using couchsurfing in eastern-Europe and it was amazing, made good friends and learned a lot about others

Of course, music, hang out with friends, go to a bar, watch a good movie, just have a good time, have fun, TRAVEL, TRAVEL AND TRAVEL

Sunrising in the cordillera de los Andes, at 4000 mt. Seeing the airplanes going next to me as O could catch them