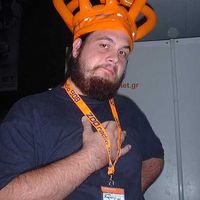 Spent 5 weeks in the States, sleeping on various couches. I just hope CS was around back then in 98.

Rolling images:Total film freak. I'll be more than happy to introduce you to the Thessaloniki film festival, film watching marathon :)
Still images:Lots of Comix and graphic novels on my reading lists. Photography is another lover of mine (she doesn't know, don't tell her ;)). I wish I could take better photographs. (@flickr)
Letters in a Row:Anything I can get my hands on.
Flying notes:Pretty much everything. Especially attracted to Jazz, Blues, Ethnic and prog-rock sounds. I'm trying to learn how to play the bass (it's not working that much though :P).

Last week, I've been mostly listening to these guys:

My grandpa is a ninja... really!

Friends think I should give advice on cooking...
School thinks I should teach computer techie stuff...
and I think I should definitely make the fine art of "all-day-goofing-around" globally known :)