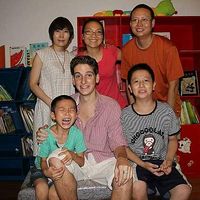 To buy a thoroughbred camel.

I like to think I'm a rationalist. I enjoy science, what is the real, here and now. I like to call things what they are. This is probably why I haven't filled this section with a load of new-age spiritual hippie mumbojumbo! Or some monotonous platitude, of which I see so many. I value the truth and have little room spare for sentiment. I'm a realist in word.

When it comes to peoples differences I think it's important to respect peoples feelings, not their beliefs. After all we do not choose what we believe. But many people believe some pretty dreadful/ridiculous things.

Couch-surfed around South-East Asia and between Hong Kong and London.

I've surfed only thus far as I only heard about CS after I had left my homeland.

*Travelling (in my own way)
*Staring at google maps for hours....
*computer gaming
*Food(not cooking)
*Bushcraft/survivalisam
*Global politics
*Wikipedia/net-surfing
*Documentries
*Poker
*talking to myself for hours
*Illicit things of all kinds ;-)
*lots of other random stuff

I love good food and a glass of ruby port. Love movies, a good TV series or chilling in a beer garden. I like relaxing actually, if that can be an interest. A discerning gentleman of leisure is what I aspire to be!

Bands: Zed's Dead, Bon Iver, Ben Howard, Temper trap, Grizzly Bear, Romana Falls, The Kooks, The Kinks and The Killers.... To be honest I'll listen to anything from Dubstep to Dinah Washington as long as it's decent; by that I mean not some trashy pop. But hey, music is music.

Films: In Bruges, Borat, Jurassic Park(childhood favorite), American Beauty, Road to Perdition, A.I. Anything directed by either Scorsese or Tarantino.

Lying on the back of a pick-up truck I hitched in a service station that took me 600 kilometers to Bangkok; staring at the full moon and stars at two in the morning will do it for me.

I also hitchhiked from Hong Kong to London.

I'd like to think I'm pretty knowledgeable on anything I take an interest in really, most of that information is of little use though. I would like to learn some languages, Arabic and Persian in particular. Also anybody who has sailing experience has my full attention, as I plan on boat-hitching in the future.