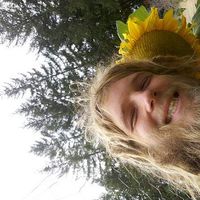 Cannabis Cannabis Cannabis. God I love that plant. I am a super chill stoner living in the hills. Living and loving the land. Coping with the brutal summers. Basking in our wonderful green winters. Just me and my lady and a bunch of wee dogs. We mostly work outside on the property, or hangout out inside for stoney TV time. Were a good bit outside Fresno (about an hour) but were not to far from Yosemite. .

All kinds of stuff. God bless you tube. Or maybe Cosmos bless youtube... I dunno youtube's awesome. I learnt basically everything I know off that youtube. Not really but for reals though, I have learned a lot though it. Since I came to be a bit of a mountain man I have had to learn electrical, plumbing, automechanics, how to use power tools, carpentry, animal husbandry, shit the list goes on. I love permaculture stuff. Lots of cool stuff in the world and I am learning about more stuff every day.

If you own a dog, watch and read the dog whisperer. And don't throw your ciggarette butts on the ground. Also, truckers deserve more respect. Without them most of us wouldnt eat.

Weed, food, good vibes, a comfy bed, and a shower.