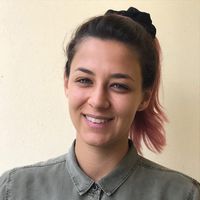 I like the concept: if everyone is sharing with respect it might be something incredibly visionary for the world of the future.

I've been through loads of genres of music, movies and books but currently the situation is: jazz, Richard Linklater and Girls with Lena Dunham, french 700 romances.

I think the best way to speak about a person is to tell a story of her:

While I was working on my first projects at university, I used to listen to radio everyday. A friend of mine suggested me a podcast called Babylon and I started to get really deep on it. I listened to Babylon for years and I discovered loads of music facts and songs; moreover in the same period Spotify was spreading among my friends and we were just floating in a fluffy non-tangible world made of music. But one day, out of the blue, Babylon was closed for reasons we can't understand. I remember sitting on the ground watching radio through my fingers on the face, listening to the last melancholic words of the speaker: it couldn't end like this. Someone told me about change.org and I started a petition that collected 1500 signs in 3 days. It was during the first days of June 2016 and the speaker contacted me asking me for explanations and I say "man I don't know, but maybe you should come back to radio". In September of the same year the were on air again!

I don't know what really happened but since that day radio has become a fundamental part of my life.

I can sing sad love songs with ukulele or play Wonderwall with a guitar; I can take photos of you and promise that when I'll die they'll discover my talent and your face will be published on the wall of some-famous museum.