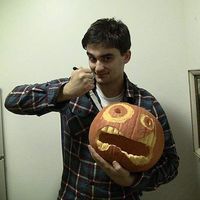 My shower is quite scary. I like it though.

I would probably give you my bed... which is a futon... I have a separate bed next to my computer in the other room I would sleep in.

Sorry if I send you couch requests at the last minute... usually drunkenly also... sorry.

I actually don't want to look too much like a partier... I am quite boring... all I do is play video games and work.... and if I offend anyone I apologize! I am really trying not to offend you or be rude! I just say the wrong things sometimes when I am nervous.

Oh! I got a last.fm account also! check it out if you are bored...

Not much to say really... I come from a small town in New Hampshire in the USA. I have left the house for the first time a few years ago and it has been interesting but I'm not sure if it is needed.

I edit travel videos. It makes me want to visit places.

When I got my fortune told by an astrologist she told me I'd never leave my house for a long period of time, I'd die alone and I'd never accomplish my goals in life, but I was a nice guy... too nice and too picky.

I want to fight fate. I want to live in another country for a year and learn the language at least.

I actually would like to couch surf to meet all kinds of people. Knowing people makes you powerful... not that I want to be powerful, I just want to expand my world. I like telling stories and hearing them also.

I know a decent amount of places to go where I live,... most of which I've never been so it'd be interesting for me to see myself!

I sometimes take photos of stuff... I am too shy about it though... so I would never make a good photographer... I hate when people see me taking pictures and I hate taking pictures of people when I don't know them. It makes me feel just as much self conscious...

"If danger was a beautiful woman, I would marry her."

"Boy, I think it's about time I tell you the difference between a man and a woman. A woman isn't a woman unless she's pretty. And a man isn't a man unless he's ugly." - From the cartoon show Flapjack about pirates.

I am sort of shooting a video on CS... totally unprofessionally done... but I am so lazy that I haven't edited it yet...

and I'd show anyone around... not to show them around but just because I probably never did anything myself... so it's like a new adventure for me too!

Not the most flattering video... and yes I was told that it is gay to ride around in a basket.

Drunk postcarding - I like sending postcards when I travel... I send usually about 40 to people. I think I get maybe 3 thank yous... so it's always best to make them totally crazy and drunken because no one is going to thank you for it anyway.

Messaging people on couchsurfing when I am bored at work... it's already been 3 hours here at work and all I've done is message 10 people in Iceland...

I don't think Ed Wood is the worst director of all time and felt it was entertaining at the very least... felt like he might have gotten black listed for making Glen or Glenda.

found the meaning of life to be in a constant state of orbit around the earth while enjoying the ride as all for one for the living.

I speak only the hard, ringing tones of personal conviction and also some French...

- that was taken from some article by Cracked.com

There is nothing to teach. We all already know the answers, but we don't admit it because what would be the point of continuing if you knew it all?

At the moment, I am living in my grandmother's basement. I think it is pretty cool.

I can share a ton of things I guess... I know a lot about beer and drinking beer... I sorta know some cool places, and I like weird live music. I also have a car, so if someone wanted to go on a day trip somewhere, and my schedule permits it, I can do that also.