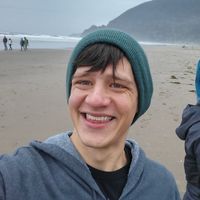 Making things work, be it code, circuits, computers, or the random mystery gadget I found at Value Village yesterday

I'm an engineer, a geek, someone who likes to figure things out and make them work. I love the city, the busyness, the parks, all the little cafes and shops, the things that make each city unique. For fun, I make things, and make things work - I write code, build gadgets, knit, read good books.

Well, I live life because I'm in it, because it's here. The closest thing to my philosophy is a kind of moral humanism - basically, caring about people, respecting people's innate human dignity, and working for equal rights for all people, economically, politically, socially, everythingly. The Golden Rule is a pretty good one to live by. One of the most pervasive problems of our time is the increasingly gaping chasm between the rich and the poor, and it's only getting worse.

Now that I've got an apartment here in Portland, I'm looking to host some couchsurfers and meet new people. I'm a few blocks from Providence Park (formerly Jeld-Wen Field, formerly PGE Park), so if you happen to be in town for a Timbers game, you'll be hard-pressed to find a better couch!

I've been a casual couchsurfer for most of my life - crashing on friends' couches while visiting, and my family would do things like host STP riders, so I'm excited to host people now that I have my own place.

I've got a pretty eclectic mix of music that I listen to, and track it obsessively over at Last.fm. My tastes range from things like They Might Be Giants, Harvey Danger, Vampire Weekend, Jonathan Coulton to the likes of MGMT, Decemberists, Shins, Death Cab/Postal Service, Head and the Heart, and Mumford, as well as some Ben Folds, Green Day, Killers, Regina Spektor, or Weezer. I also love me some classic rock, such as Queen, Styx, Journey, and Kansas, and have a few other random favorites that are less widespread like PlayRadioPlay!, David Bazan, Rodriguo y Gabriela, Anamanaguchi, Be Honest, Ruth Bryan!, and The Weepies. I also enjoy some classical music from time to time, particularly Holst's Planets Suite.

Movie-wise I have a similarly widespread taste - I like a good action film like Star Trek or Iron Man, but really love mind-benders like Donnie Darko, Inception, Memento. I love a good documentary-type film - Man on Wire and The Social Network are excellent, even if the latter is looser with the facts. I also love most musicals, be it Across the Universe , Mamma Mia, Chicago, Rent, or Newsies. Comedies are hit and miss, but I love most of what Wes Anderson is behind, and have a few other favorites. I also appreciate the dark side of things, be it comedy - such as Dr. Strangelove - or just dark, such as American Beauty, Requiem for a Dream, or even In Brouge. I also really love soundtracks - Social Network, Tron: Legacy, Garden State, (500) Days of Summer are awesome, as well as so many others.

Like my music, I obsessively chronicle my reading, this time over on GoodReads. But summarily: I love sci-fi, especially when it is used as a lens through which to investigate modern society. Some of my favorite authors in that realm are Ray Bradbury and Larry Niven, although I have a lot of exploring to do there. I also love a lot of contemporary classics - my all-time favorite books include Catch-22, Lord of the Flies, Of Mice and Men, and Crime and Punishment.

As of late I've read a lot of modern/post-modern fiction, and am a huge fan of Jonathan Safran Foer's first two books, which are very different but both phenomenal. I've read Dave Eggers' A Heartbreaking Work of Staggering Genius, and it was quite enjoyable. A.J. Jacobs has written several books, the first two of which I thought were surprisingly well-written and thoughtful, when they could have been much less so. I also adore Douglas Adams and love a good short story.

Skills...I knit, code, cook to some degree...do math...I'd be glad to teach fellow couchsurfers any of the above! I also like gadgets, and do some hacking around with microcontrollers and circuits and such, so I might have a project going when you come by that I could show off if you're interested.

As far as learning, I'm curious about just about everything, so I love to hear about what people do or know about. I love learning things, especially from people.