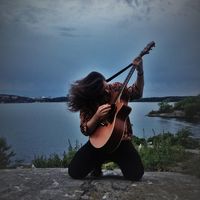 To enjoy the summer as much as I can!

I am 30 years old and live in Stockholm. I am a positive, spontanious and ambitious person who likes to meet new people and try new things.

I have couchsurfed and hosted guests several times. I have met a lot of great people through Couchsurfing, it is the best way to meet new people!

The first time i tryed surfing was in Rijeka in Croatia where me and my girlfriend stayed with Nina, a great girl who hosted two other surfers at the moment. It was a small apartment and she insisted in us having her bed! She showed us her town and we had a great time! After a few days we hitchhiked to a concert in the nearby town together. The concert was legendary and afterwards we partyed all night with the band.

The second time I Couchsurfed I was in Lisbon and had a hard time finding a couch. Then a guy, João who worked at the hostel we stayed at, asked us if we wanted to stay with him for a couple of nights. We stayed there for three nights and had a wonderful time. His appartment was on the top of a hill, and the view from his window was amazing! We had a lot of fun, we went to the beach, we cooked dinner together and went to some bars.

I love music, listening, dancing and playing it. I am involved in several music projects at the moment. I sing in a Rock band, I am the second half of a Singer songwriter duo and play guitar and sing in an acoustic Pop/Jazz band. Music is my life and I never leave home without at least my ukulele!
I like spending time outside, skiing, jogging, trekking, hikeing, bikeing, surfing, volleyboll playing or just chilling out. I think it is important to take care of the nature and the environment you live in, so I try my best to be as environmentalfriendly as I can.

Movies:
The Notebook, Call me by your Name, Indiana Jones, Leon, Into the Wild, Lord of the Rings, Back to the Future and Truman Show.

Once I was in Killarney, Ireland, working as a volounteer with my girlfriend. We were there for 2 weeks clearing the old oakwoods from invasive species. We were about 16 people from different corners of the world working in the beautiful Irish forests together, and in the evenings we chilled out together and tried the awesome Irish beers. We made some new friends that we still keep in touch with.

Things I'd like to learn:
To play the saxophone and the trumpet, photography, drawing.