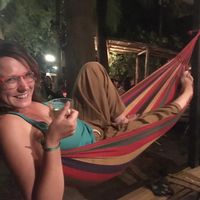 I’ve travelled and worked abroad since 2010, with a few brief stints back in the UK. I have traveled extensively across Asia and the Americas. In my past life I worked for a political party in the UK. After teaching English in Libya and Saudi Arabia I started teaching online and have leapt into the world of digital nomadism. I now work in editing and proofreading.

Can't pick just one!: sleeping on a coconut plantation island in the Philippines; being guest of honour at a week-long Brahmin Indian wedding; attending Glastonbury Festival, Somerset; seeing the Cricket World Cup in Sri Lanka; having dinner in a top Moscow restaurant with the nouveau riche; attending the Maha Kumbh Mela -the world's largest festival; extensively exploring post-revolutionary Libya; travelling in the forbidden Kingdom of Saudi Arabia; seeing Ukraine push West after the Maidan revolution; travelled 3000km in the Algerian desert in 6 days over Eid, using only public transport; dancing samba in an old fisherman's hut in Brazil; carnival in Brazil; seeing a jaguar in the Pantanal and a sloth in the Amazon; travelling by public boats in the Peruvian Amazon; seen the Russian Far East; visited the local islands in the Maldives by slow boat; spending time with communities in Nicaragua that can only be reached by boat

I love languages, I’d love to learn yours :)

I'd like to learn about different ways of life across the world.