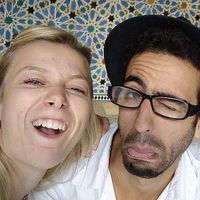 Well...
whatever I might say here, it won't give you any idea of the person I truly am [as Gorgias said language is an imperfect instrument]
Even so, in order to sketch me I'd say that I'm a someone who's interested above all things in living life, enjoying it, squeeze it!. And since we're social beings, I love hanging out with my friends, going out, meeting new people [particularly from different cultures]
Apart from that, I love music and cinema. I'm a "kind of "guitar player who in spite of his age still dreams of playing a guitar solo in front of 80.000 people..., and someday filmmaker [hopefully]
I could say more, but i guess you better visit or host me, and you'd know more about me.

Despite people say that I think too much of philosophy my personal philosophy is not having a philosophy [which is a philosophy :)]
Basically living life, that's it! enjoy the time I've been given.

Nothing really special, I just try to meet, help, and host people that are interested in visiting my city.
I am demanding accepting requests [Since I prefer to save my time for people whose company I can potentially enjoy] , yet when I do, I try to give my best to my host according to the principles of hospitality from the country I was raised in.

P.S. : NEW COUCHSURFERS WHO SEND COPY-PASTE MESSAGES, PLEASE DO NOT CONTACT ME!!!

I have made some really good friends because of my CouchSurfing experience and I have met one of the most interesting persons in my life.
However, I must say that things are recently changing from what CouchSurfing was when I signed up [six and a half years ago] : CouchSurfing is becoming more and more popular, which is causing that so many new people who have NO IDEA about what this was about, join simply intending to take advantage of the host. Put another way, finding accommodation for free.
Needless to say that we CAN NOT tolerate it, we CAN NOT allow them to spoil such beautiful and helpful project. We must remind this people that CouchSurfing is NOT a way to get a hostel for free, but an amazing chance to get into the "true-real" city through someone who is living in that city.

I guess that the problem comes from the organization itself, whose policy has changed so much since it became a for-profit company in 2012... Ironically, ever since the incidences affecting women have soared, just by chance...

As I said before, music, cinema, sport, travelling.
But not in the way to fill one's résumé with, yet I say with my OWN words: I LOVE cinema, I LOVE music, I LOVE sports, and [guess it] I LOVE traveling.

I hate label things, so I would say that I like the music, movies and books I like.
In other words I have a, what hipsters would call, "eclectic taste".

I can teach and at the same time learn languages, music theory, guitar technique, cooking, history, salsa, computer programming... but above all I'd like to teach and learn little things that have made my rather more interesting.

My time, which is the most valuable good I temporarily own.
I can show you the best and the worst of a city that I professionally show to travelers [NON-tourists].
I am not a local but I guess that it is interesting to picture the idea of someone who has lived somewhere for almost 15 years, for good and bad.

Apart from that, if you are a party-man, party-woman; just press the "Fiesta" button ;)