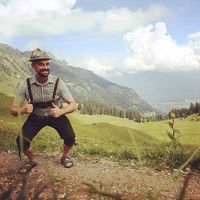 I split my time between San Diego, CA and Grand Rapids, MI.

I work as an advisor to tech startups (www.coreythehart.com), and I also work as a Chapter Director for www.startupgrind.com, the world's largest network of startup and tech entrepreneurs.

I've been to hundreds of cities in dozens of countries around the world so far, studied at the University Of London. Lived in the Austrian Alps as a young boy. Lived in Rome. Backpacked Europe four different times for months and months on end. I WANNA GO AGAIN!

Some people SAY they like to travel... and I'm like... "show me your Passport!" Travelers are the coolest folks around. There's just something about a person who can ditch "home" and walk straight into mystery and uncertainty. I find that if someone doesn't have a traveling story, they're short on stories.

2022 and beyond looks to be different for travel... but the bucket list is just growing and growing regardless!

There's almost nothing better than a couple cocktails and cooking with someone, so if that's your thing... we'll get along just fine. I love learning to cook food from other cultures and I love it when I can learn a family's special twist to a dish. One time a CouchSurfer's mom Skyped with us while we were cooking her famous Borscht and we had a transnational cooking extravaganza filled with drinks, shots, wine, and laughs. It was awesome!

I like wandering... and getting lost is inevitable anyway with me, so I gotta. I usually go the wrong way wherever I'm headed. Never really matters though since I usually find awesome hole in the wall bars and the best restaurants this way!

Just be kind. Be open. Smile. Keep moving! Slow down! Always work towards reconciliation. It's okay to push people, but it's better to pull. Have a mentor, be a mentor... have both.

Through CS I've met a lot of people and found tons of fun stuff to do. CS has been a great help in making all my trips in the US and abroad so much better than if I were to have simply rocked hotels/hostels and all that old school stuff.

I have met people for coffee, for drinks, I've been hosted a few times, and have hooked up with a bunch of CS groups too.

Travelled the world as a nightclub and festival DJ... the stories!

As I’m a professional photographer, free headshot or portrait for everyone!!