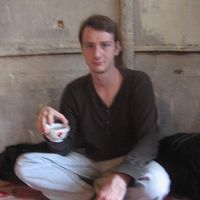 I grew up in New Orleans and Southern California so I rarely say no to a good time or a new adventure! I can be friends with all kinds of people, and have lived in and visited enough places that this isn't an empty promise.

I try to avoid Mendacity. (This involves a Tennessee Williams quote, it's a southern thing!).

I've called many places home and I have many philosophies.

I am always available for advice.

One of my friends was part of the program, I think it is wonderful. So far I have surfed a couple of times and have made many friends through local groups.

I love music and almost any live music, after that I have diverse interests.

I got an ice cream cone in the bazaar in Damascus. They filled the cone with plain vanilla and then chucked it into a vat of crushed pistachios. Best I ever had.

I have alot of stories, it's best to ask.

I enjoy cooking very much. People also seem to find my advice helpful.
People usually have something to teach but most aren't willing to learn.