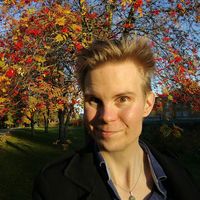 Seek ways to express myself; pursue avenues of truth

Leaf in the Wind

It's not my invention. I stole it from Walsh in Serenity, but I'm unashamed of the fact, as it seems descriptive of me and I very much like the sound of it. Bound as the wind, I go where my mind takes me, literally and figuratively; as a leaf in the worldly winds, I wish to be free of weight, shackle and burden. I could apply the simile to many aspects of myself.

As for personality, I would say I'm a kind and polite person with a helpful streak, if it's in my power. I'm a cross between solitary and social in a rather curious manner; I enjoy solitude a lot, but I also enjoy being around people, and indeed am sometimes reminded life is better with others around you. I'm adventurous and passionate when I do the things I truly enjoy, but sometimes I can be a little reserved and indecisive.

I am an aspiring writer - now nothing more than a mere dilettante, but one who strives to become a poet, a short fiction writer, an essayist, perhaps a novelist in the future. A bohemian, an aesthete, a seeker of truth, an idealist.

Let's meet and have a conversation! Despite the tone of the introduction, I'm rather easygoing and sociable, so never fear! :D

Within each person there is an infinite pool of potential just waiting to be tapped into.

So yeah, is there much to add? Most of us could be so much more than we are, but we either choose to ignore or don't know how to tap into all that golden stuff inside us.

"Make your choice, adventurous Stranger,
Strike the bell and bide the danger,
Or wonder, till it drives you mad,
What would have followed if you had."

To see a world in a grain of sand, and a heaven in a wild flower
Hold infinity in the palm of your hand, and eternity in an hour

Spread the message about CS, travel, and open my own door for travelers. I read about CouchSurfing in winter 2010 and immediately thought "this is way cool" and went to try it out soon enough. To this day, it has been pretty cool.

June 2011 I spent 19 days in Lithuania with 16 nights spent with 4 different hosts. It was fun time with everyone, each stay very good in its own way, and upon leaving it always felt I could've stayed for longer. One of the defining experiences for me as regards travel and life, as it was my first time traveling independently.

January 2012 a wintery visit to Lithuania, some 9 days of CS with 3 hosts.

August 2012 popping by in England to meet a friend and CouchSurfing for a week with two hosts.

May 2015 visiting Poland of which CouchSurfing accommodated 10 days with 3 hosts. Cycling around countryside near Cianowice was a beautiful experience.

There's more of course, but they're mainly a stay here, another there type of thing. I also host people in Kuopio :)

I love badminton. It's very fast and thus much fun. I'm also interested in martial arts. I enjoy writing some stuff, short stories, poems etc., planning to make this into a bigger thing in my life.

Logical argumentation, philosophy, psychology, language... there's plenty of things, but most of them layman's or neophyte's interests.

I love music, films, books and video games. Without reading about the goodness and frailty of Prince Myshkin, the heart-warming childhood tale of Scout Finch, the wonderings and ponderings of Holden Caulfield, or a passage in a science fiction story wherein a man, revering the space of a single, unoccupied room in overcrowded Earth, I don't think I would quite the same person as I am today. A quick list of some wonderful tales:

The Idiot,
The Master and Margarita,
Works of J.R.R. Tolkien,
To Kill a Mockingbird,
Catcher in the Rye,
One Hundred Years of Solitude,
Call of the Wild &amp; White Fang,

I also enjoy comic books. Since I found works which have combined pleasing and distinctive visual art with entertaining and interesting narratives, I've become a fan of the medium:

Halfway a movie buff? There are so many good films, but some cool ones:

In music, more or less anything that pleases the ear, that is, and I've noticed I enjoy a variety of stuff from black metal to jazz to hip hop to folk to electronic etc. I also like film, tv and video game soundtracks. Some cool bands:

My first bungee jump in Warsaw. Cycling from Klaipeda to Nida. Cycling around Cianowice countryside. Swimming in summer. Drinking the purest mountain stream water in Austria. Writing my first poems and stories which I saw could be telling of talent or skill

My readiness to listen and understand new points of view. We are each a story of our own and should be treated as such. Also, any treats I may have :D