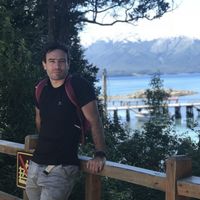 I'm from Buenos Aires and I've been living in Mendoza for two years. Now I’m living in Bariloche. I've studied Computer Science and today I'm working as a researcher in the field of medical images. In the past ten years, I've traveled around Europe during my Phd. Indeed, I lived 5 years in Spain and three months in Netherlands during an internship. Aleo, I could visit Greece, Germany, Italy, UK and France. In particular, I enjoy meeting new people and doing sports line snowboard or hiking. I love watching movies and doing exercise. Right now, I have not much time to show you the city but it will be a pleasure to meet you.

I want to meet different people around the world.