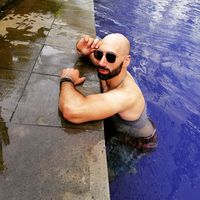 February 2021 REFUGEE IN DAR ES SALAAM TANZANIA..
escaping cold and the sanitary regimes.. that confined most of us in a quasi home jail with no basic rights🤣🤔

moved to Indonesia..
After working, years:
1 in eastern Europe/5 in Russia and ex soviet countries / 1 in China / 5 years in THAILAND/

1) JOGJA INDONESIA (But travelling every month, next destinations might be Padang, Lombok, Bandung)
2) back home in FLORENCE ITALY every 4th month

So we could meet in any of the above listed places!

Particularly interested in getting to know people from ASIAN / AFRICAN countries!

PS I m in KL and BKK every three months.

ABOUT ME
Having quite a lot of free time which could be a better of way of spending it then discovering new places, getting in contact with new people..cultures..

I will be always happy meeting for a coffee/a talk/or having you show me your town.. sometimes I even host :)

Well I ve been hosted a couple times , the same about hosting

Travelling, fitness, foreign languages, cinema, and trying to get the most of the fun life can give..

visited 34 states (15.1%)Create your own visited map of The World

Any language, share experience in travel logistic or living in any of the above listed countries

Due to the LIMITATIONS IMPOSED on the messages on this platform, if you really need to
(and you are just not spamming dozens of people coz you need a place to exploit)..