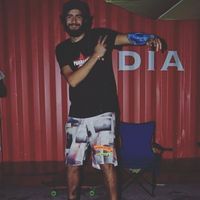 •I'm a last minute dude. You can send request for whenever but I'll probably answer few days beforehand :)•

I like trying new things and having new experiences all the time. Music, sports, nature, science etc. are some of my interests. In short, i'd say im an explorer in life.

My goal is to get the most out of life, taking advantage of every given opportunity.

It's cool I guess.

• 'The Hitchhiker's Guide to the Galaxy' series by Douglas Adams has been a great inspiration for me.
Some other authors i like: Δημήτρης Χαΐνης Αποστολάκης, Aldous Huxley, George Orwell, Henry David Thoreau, Wilhelm Reich, Noam Chomsky, Jack Kerouac, Yaval Noah Harari etc.

•Alternative, psychedelic and stoner rock but also punk, ska, metal, blues, jazz, funk, traditional and Pink Floyd (they are their own genre). So almost everything.
Some of my favourite bands:

I play drums and cajon, a bit guitar and bass. I'm also into underground scene and gigs.

Once I showed up in the wrong continent for an appointment.

Long conversations, sharing experiances, doing chores and i can even cook for you if you're brave enough.