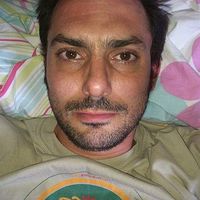 Find the good in everything.

I want to travel, to meet people, to film other cultures and country to show that we are all the same.
Now im waiter so i work a lot, for lunch and dinner. My free days are tuesday and wenesday. Ive no car.
The surfers can use everythings: kitchen, washing-machine, computer, net.

The only thing i know is that i know anything

A friend tells me about the movment.

Winter season in restaurant at moutains, army, but never by this way...

When i was a student, ive worked one month for the national channel tv. One day, like the others, i was waiting in the hall that the chief gave me something to film, he came to me and said that i have to go right now at the fun fair. i go with my big camera and i started to film people angry about the government until the moment when the chief told everybodies that they have to go the the ministry. I followed them and when we arrived the minister didnt want to meet them. Ten minutes after to much securities forces came and the fight started... i was the only one cameraman one the scoop, it was my first intervention and the daily tv show of the day started with my first film...

To film, to photography, to understand lot of things beyond the words ...