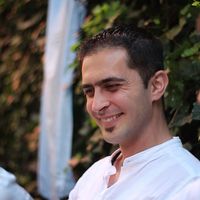 I love having guests! A part of this has something to do with my being Iranian. And the great culture in which I was grown up.

An important update:
If you have smallest prejudgement about my gender, nationality, or things like this, it signifies that I can't be a suitable host/guest for you. :)

Hosting some good guests (or maybe being guest of some good hosts), getting to know some interesting people.
If I host you, it is not to get a reference. It is of course nice to get one, but I don't expect it at all. The fun is to know each other and enjoy the chance of discovering a new person, a new character.

Once my boss wanted me to implement a method from a paper. I was amazed by it. The paper suggests a hypothesis on the pattern based on which, humans learn languages, memorize vocabularies. You could see how the performance evolves as time goes by. And then you think this may be the way you memorized vocabularies when you were a baby!

If you are learning Persian, I gladly can teach you some.

I try to have something with me when I am guest somewhere. Iranians do that, and germans as well. But what I choose depends on many factors. I also may cook, if it is possible. But at the moment I don't know exactly what to write here, since I am not experienced with couchsurfing and couchsurfers.