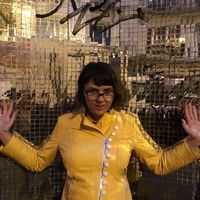 Originally from the dirty P, I moved to New York City - the greatest city in the world - to fix the MTA. I love music, comics, comedy, roller derby, and making puns. Catch me around Brooklyn on my brompton seductively obeying traffic laws.

Made money and garnered fame for my art!
https://youtu.be/6QJYgm0fRHk

Topical puns of the day.