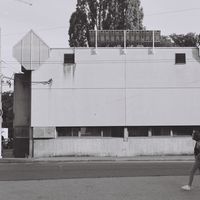 i am super curious about all kinds of music, but at the time i listen to a lot of house music with grooves and rythms from the middle east, western Africa or latin america

Have you ever heard of the Synalpheus Pinkfloydi or the Mantis shrimp?
the first one is a shrimp that has been discovered this year and named after pink floyd. it produces a 210db by clapping it's claw and kills it's preys by doing so (a plane lifting off is 130db and there are risks of deafness from 110!).
the second one is a shrimp usually around 5-10cm long that has one of the most elaborate visual systems discovered. they are able to see at 360° and have 16 photoreceptor types (we only have 3!), including ultraviolet and fluorescent light.