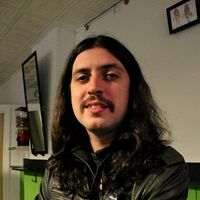 In 1972, a crack commando unit (composed by one man alone) was sent to prison by a military court for a crime he didn't commit. This man promptly escaped from a maximum security stockade to the Los Angeles underground. Today, still wanted by the government he survives as a soldier of fortune. If you have a problem, if no one else can help, and if you can find him....maybe you can hire... DANIEL JIMENO

Last time I went to a new city I roamed and saw the stuff but I got a bit bored (That happened in Lisbon, to be precise).
And I think that is better to stay in a local's house and take a glimpse into the place's everyday life (for free!) than staying in a hostel, meeting and going out with other foreigners (if you are lucky) and missing the ins and outs of the place you are visiting (and not for free!).
Well, that's why we are all in Couchsurfing, aren't we (I mean, apart from the free hosting)?

Not actually interested in anything specifically, I'm actually kind of apathetic. Not true, things are that I am indeed deep interested and knowledgable in an extremely wide range of fields, either artistic, scientific, humanistic, or whatever.
We'll finish earlier if I point out in what I am NOT interested: football, sports, exercise, health, nutrition, vegetarianism, veganism, yoga, series, Paulo Coelho, religion and spiriutalism, ska, balkan music, reagge, Beatles, Rolling Stones, U2, Guns'n'Roses, AC/DC, Pink Floyd, Nirvana and every other dinosaur of rock (LAME! Sincerely, we are in the 21st century, how long are those bands gonna keep on sounding in practically everywhere? Is not everybody already done with their cheesy music?)

Best band ever: https://muerteomatute.bandcamp.com/
My favourite films are "Pepi, Luci , Bom y otras chicas del montón" by Pedro Almódovar and "Dumb and dumber". The second part is nice as well.
I also like auteur films, Peter Greenaway's films for example. I can understand why most people despise him but I adore him.
I don't like books if they don't have ilustrations.
And about series, apart from the A Team, I don't actually follow any, I see the current craze about series as a sign of decadence of our civilization. "Lost" was the dumbest thing ever. "Game of Thrones" was ok until season 4, then it turned absolutely brainless.

Once I read a book without illustrations, oh my god that was hard, will never do it again in my life.

I can teach Spanish to whoever is a bit interested. I'm sure I can teach and share more than that, but I cannot come up with anything right now.

I don't like to cook, but so far most couchsurfers have loved my cooking skills, so the less I can do if I go to somebody's house is to cook a delicious tortilla (or paella, but that will be more difficult to nail, since I need the proper cooking instruments that cannot take everywhere with me).
The same applies to guests, I will do my best to make them confortable, even if they like Led Zeppelin or Dire Straits (really?! ¬¬ ).