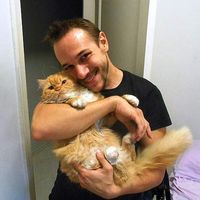 I like different kinds of people (but some not for long :P ), party animals, thoughtful people, young and old... I like to be suprised or shocked, so whatever weirdo you are, don't be shy! I have a very broad range of interest so I can party with you until sunset, go for a cycling trip, cook a dinner, debate about politics or public transportation... But, don't ask me about my favorite music :)

I like to party - but that does not mean waiting until midnight for girls to get dressed up and go to a touristy dance club. It means jumping into a garbage truck and getting out the other end, it means swimming in river naked at 4 am, it means sniffing extra hot chilli powder, it means being pulled down the stairs in sleeping bag out of building into snow without keys.

I love all kinds of technology (trains, transportation maps, military vehicles and systems) IT (people often ask me if I am paid to evangelize on Google products :D ), JIRA, AutoCAD. SDL Trados and other weird stuff :D

CouchSurfing changed my life as few other things did. I would not be what I am now without it. I met the most amazing people, and had the most crazy and enriching moments of my life with CSers :) I've been CouchSurfing for two months straight, I've hosted 7 people at once, spent countless days and evenings with visitors... But I am not one of those people that do nothing but host CSing, I still do have my social life outside of CS community and so sometimes must say no to hosting :)

I like to take my time sitting on the toilet, relaxing and replying to CS requests there :)

I hate debating "where shall we go" for hours - I will rather sit on that toilet while everybody agrees on something :)

When I was younger I was reading at least one book a week, now I read a lot on the internet, but not many books anymore, I don't know why. I don't watch movies much. You are welcome to suggest one, or better watch it with me :)

Two months of CouchSurfing in NY. One host was a musician, drug addict, bisexual, mentally ill and living with his mom - a rabbi. And then I met my last host literally while walking on the street :)

I walked one whole day through Judean desert from Hebron to the Dead Sea.

I got illegaly into Lebanon coming from Israel, avoiding all soldiers and policemen (and there were a lot!) and then ended up CSing in a room overlooking a military base with soldiers on every corner.

I can tell you all the useless facts about public transportation, share drunk stories or get angry over politics. Maybe I have a lot of knowledge, but I miss the experience, the wisdom of a mature man (or woman :P). Can you teach me that? :)

Czech president's recent toast: "Death to teetotalers and vegetarians!". Prague is a place where you will most likely drink more beer then ever (for about one Euro for half a liter) and eat pork everywhere. But don't worry, I hosted many muslims and vegans and we had fun nevertheless :)