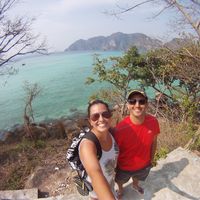 I like sports, all of them. Actually, almost all of them... I can make a complete ass of myself in the water, and that makes me dislike some activities... hehehe

I'm very open minded, trying to learn from everything.

I am a christian... Not the annoying kind.

I'm that kind of weird guy that is always looking at everyone and talking to them and analysing them and making theories about mankind as I was not part of it.
Update: I've managed to become a lot less weird and I'm also theorizing less... I find that good!

I'm straight. Queer friendly, as long as nobody touches me in a non-familiar way.

I like to dance. I'm not bad at it. And this is independent of alcohol drinking.

I'm here because I like it and I actually believe this. All this meeting new people, hosting, traveling, learning, sharing... I find it awesome!

I hosted and traveled lots of times and don't regret any of those.

I've attended some meetings, but I don't participate a lot in my local CS community.

Backpacked a bunch of countries in Europe. 2011.

Don't know how to make that map thing that pins people you've couchsurfed with in your profile.

Pretty much everything... I'm very open minded and even I get amused 'bout my diversity capability...

Forrest Gump , A Dona da Historia, Anger Management, The Postman, As good as it gets and The Theory of Everything.

When I was a kid, I broke my arm trying to fly!
Does that count?
If it doesn't, then I must add 'I did fly'!

I really don't have one thing I'm really good at.

But as I am interested in all kind of different things, there's probably some areas I might know more than you do.