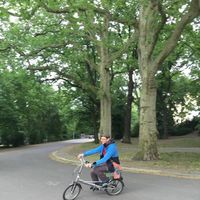 don't feel obliged - act according to your conviction

I am Daniel and rather a quiet person, but nevertheless communicative. I would say I am friendly and joyful an have a good sence of humour.
I am not really on partying, drinking, hanging around etc. - I mean aimless waisting of time. I am quite an active and independent person, I always need activity - something to do or to explore. I really like music and also dancing (mostly electronic) but I am not in that scene (dont do that every weekend).

I guess I am quite pragmatic.

Used CS mostly for meeting others and doing something together e.g. going for a film together or have tandem. Its a good platform for finding others with similar interests.

Tried to get more hosting experience recently. Good experience up to now.
I saw that it was quite good to talk about our couchsurfing experience and how we feel about it - my result of these talks: be straight forward, say what you really want and dont think too much about what somebody might expect from you.
I think its good to find a well-balanced ratio between doing something together and doing ones own stuff.
Recently I used CS rather for meeting people in Berlin for doing something together (going to a film, learning languages, bike rides).

I really like to be in the countryside - hiking or cycling. In cities I take less care of the sights but rather want to experience the general atmoshere and daily life of its inhabitants.
I like foreign languages, music, movies and also dancing.

When hiking through the highest mountains of Croatia I stayed in a hut with view to the sea - great: mountains and in the same time the sea!

depends on the situation