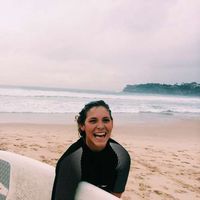 To show people they're more than a job title, a illness, a statistic, a race, religion or nationality. We are human, we are diverse, we have a purpose, uniqueness and mission in this carnation. I enjoy studying yoga asana, pranayama, astrology, psychology and cultures. I travel for a living as a tour manager but since Coronavirus has struck, it has halted my travels. My partner and I have an insta we are making while on this break, @ourlife.ontheroad - we share our life - how we work together, stay in love, live homeless, deal with Stefs immigration, vegan cooking recipes, resin art, astrology, yoga practices, wellness and travel. We are really excited for the summer off to dive into our hobbies that have been put off so long due to us going from tour to tour.

Currently we are in NASHVILLE &amp; will be here till the 5 of June ... THEN TBD :) we Are furloughed till August so we will be Airbnbing around, staying in a place for a month at a time.. then switching it up ... like my favorite quote says: “ a rolling stone gathers no moss.”

My names Danielle - I'm 26 - I dropped out of college to learn things that can't be taught in the classroom.

Two months after I graduated high school in 2012 I jumped on a plan to backpack Europe for 5 months; couchsurfing, hitchhiking and Eurorailing around, planning about 3 days ahead at most to where my next destination was going to be. Letting things happen and opportunities erupted everywhere I went. I was extremely blessed to have encountered the people I did, all of them taught me something about something, I wouldn't be who I am without the experiences and people I met in Europe.

I got the opportunity to travel to Australia and New Zealand August-Decemeber 2014 with a couple friends to do a homeless ministry. Were going to be living on the streets showing love to those who have been outcasted by society and we'll be relying on God to provide for us and the power of prayer to heal the broken and use us to show people His love. We want people to see that there are Christians who are down to earth, nonjudgemental and just as fucked up as everyone else.

2015-2016 I moved to Branson, Missouri. By doing that I got the opportunity to work on Vans Warped Tour which is how I began a career in tour managing. I tour managed bands &amp; then moved into national promotional event marketing for companies for two years straight until the beginning of 2017. I went to Southeast Asia, met an incredible guy and traded in every hour of the day babysitting rockstars, traveling around North America, to spending it on The Isle of Man, where I spent 4 months researching unique careers that usually don’t provide a set degree Path, rather one a lot of people just stumble upon, like I did with tour managing. (Who would have thought my husband and I would be getting paid to travel around America, getting salary, food and hotel per diem, cool vehicles &amp; saving all our money.) My goal was to have kids who are confused on what path to take a different path that more suits them. I hate the thought of debt and I feel Americans especially subconsciously force kids into going to college even though they don’t know what they want to do, then accumulating a ton of debt, and having to then be apart of the system. Anyways! TOO much detail.

So for the past 3 years my partner and I have been in America running a poster sale where we go to colleges around America and sell posters to kids, spending a week at each college, then heading to the next. If you went to college in the US or UK you probably had a poster sale on your campus. We partner with a non profit and build schools overseas for war torn countries with a percentage of our profits. At the beginning of 2020 we got the opportunity to work for a brand that’s near and dear to us, Miyokos! We love her vegan cheese and cookbook that’s super simple. When we got the opportunity we had to say yes. But then.. the virus and March 20 we were furloughed. So were making the best of it and spending this time Airbnbing around, putting all the content we’ve taken the past few years into digital format. We’ll be doing resin art, flower pressing, making our business website and personal websites, teaching yoga and breath work and my all time favorite: ASTROLOGY!

Culture and perspective were given to me by traveling and I believe they’re the best keys to understanding humanity and where people are coming from. Esoteric views and seeing where the underdog is coming from has always pulled me. I believe astrology empowers people by letting you know that you don’t have to look outside of yourself for gurus or healings, drugs or fortune tellers.. but that everything you have is already inside of yourself. I want people to know that their intuition is AMAZING! The deeper I’ve learned about astrology the past few months in reading and interpreting a few close friends charts, the more I’ve realized how healing it is when people go.. “wow, so being overly emotional and empathetic isn’t a mental illness?” Or “I’ve felt in charge all my life, bossy, full of energy, needing to always do something but never knowing what to do.. wishing I had one skill instead of 6 things I cant choose between.” These are some things I’ve been told recently by my friends and its made me really passionate about looking at others charts and helping them understand the core self, rather than fortune telling what you are supposed to do.

visited 22 states (9.77%)Create your own visited map of The World or Like this? try: GoogleDate

I couch surfed through Europe in 2012

I enjoy about anything that involves people.