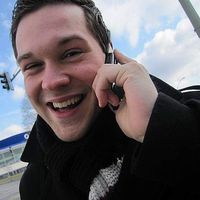 am an easy going, friendly person. I enjoy listening to music a lot and traveling anywhere is an amazing experience. I've recently finished stuying with the Open University . I currently work for my local council. For most of my life I've played sports and I especially like to play golf, cricket, tennis, rugby, football, table tennis and cycling. I like to have fun, but I'm just as happy having a quiet chat with a friend or spending time alone thinking about life, or exploring places.

I'm interested in meditation and learning about buddhism. I don't believe in committing myself to one set of religious beliefs instead I'm using buddhist ideas that I find useful. I think that its important to let go of grasping to things, such as desire and fear and stay in the moment, but not in thought.

I'm going to explore this planet and meet the people on it. I think that we are simply another species on this planet, religion is interesting but i don't feel that we are all heading to heaven or hell.
Buddhism interests me, especially after having been introduced to Korean Zen Buddhism by some buddhist Nuns, who were some of the friendliest and happiest people i've ever met.
I've also just found this on the couchsurfing wiki for Sweden.
Lagom - word that lacks a counterpart in most languages. It basically means "not too much, not too little, but just the right amount." This explains the Swedish desire to live a normal, pleasant life, without standing out from the crowd too much

* Introduced lots of people to couchsurfing

* Couchsurfing and occasionally hosting or showing people around.

Every couchsurfing experience is unique.
Everytime you surf, you delve into a different way of life
Every couchsurfer is unique
But we all connect as one , as a member of this planet.

Through couchsurfing I have been to many unexpected places, met many crazy people and become involved in activities only the experience of staying with a stranger could lead me into.

I've seen so many amazing places over the last 6 weeks, everywhere we go offers something life enhancing in it's own way. The most important experiences for me however, involve interaction with local people (a great quality of couchsurfing) and meeting people from all around the world.

I want to share some poetry by Karl Pilkington.

Bubbled wallpaper,
What a mess.

Washer - dryer knackered,
What a mess.