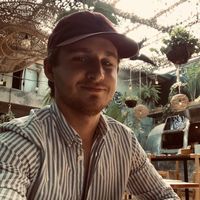 I would generally say that I am an outgoing, interested and very friendly person. I love sports, travelling and simply to meet new people and cultures.

My personality from the outside, my character from the inside and my attitude towards most of the things in general has probably changed a lot over the past few years. Not only have I graduated and travelled a lot, but I have also "broadened my horizon" as the Germans say. It basically means that I got to know new things, experienced new perspectives on the world, different mentalities and even learned about some religious and spiritual things, which I stubbornly rejected a couple of years ago. I got more curious and try to understand other people.

Although I would say about myself that I am a very social and talkative person, I am honest about the fact that I hate small talk! Instead I prefer to talk about specific topics or feelings (I don't mean any political debates. I rather have talks which come straight from your heart, or as the Russians say from your "soul").

And let's get one thing straight: Russians are not at all "cold" people. Russians are probably the most hospital people I have met in over 8 years of travelling.

Being able to speak 4 languages has enabled me to make so many interesting experiences, and actually made it so much easier to access another country's society. Learning new languages is probably one of the the things, which motivates most people here to meet new people and travel!

I started my Couchsurfing career in Russia. I was lucky enough to be hosted in many other countries, such as Poland, Canada, USA or Colombia.

Every single stay or meet up with another Couchsurfer was so cool! I would have never seen and learned so much about each place, if I would not have met those amazing people.

It is so great to meet people, who often are so different from you and have a completely different lifestyle. Here in the CS community it really doe not matter, where you hang out at home, what music you listen to or what political views you have. You just have a good time with whoever you stay or meet up with.

I surfed a lot over the past few years. I tried to give something back to the community, so only recently in the beginning of 2017 I hosted my first Couchsurfers. I had solo travelers and groups. I really enjoyed my time with each one of them, and felt so good about helping them out! I loved it!

Irkutsk, Baikal! Most beautiful part I have seen in Russia! On top I did ice bathing, so according to tradition I added 5 years to my life!