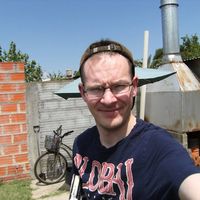 Hi, my name's Dave, I'm a 36 year old Scottish guy. I was a student from the age of 17, up until the start of 2009. I enjoyed it a lot, meeting nice people and making friends from the U.K and abroad. After a bit of time,I've ended up getting a job in Edinburgh and have been in the city for over seven years now. I'm quite easy going and chilled out and like travelling,socialising and learning about different cultures. I formerly worked with older people as a Hospital Social Worker at the Western General Hospital in Edinburgh. In january 2018 i started working in a community social work centre with adults, between the ages of 18 and above.

Treating people with respect, learning more about the world generally, and hopefully seeing more of the world, as a life-time seems to pass by so quick.

I'm interested in building up positive relations amongst different people in the world and learning about different cultures. I really enjoy meeting people and making new friends. I've hosted quite a few people now and hope to host more in the future. I've attended some of the weekly couch surfing meetings in Edinburgh, attended the Edinburgh Rocks couch surfing festival twice and attended a couch surfing event whilst in New York.

I've hosted quite a lot of people now, and its been a really cool experience, with the chance to meet a lot of nice people, have interesting conversations and make new friends. I´ve hosted three people since moving to my new flat, which now has a spare room. I had my first couch surfing experience in Belgrade Serbia in August 2011. It was a fantastic experience. I was also hosted again in Argentina which was cool.

Travelling to China, seeing the Forbidden City in Beijing and the Great Wall. Standing on the ferry in Hong Kong and taking in the great view of the architecture at night time.

I really enjoyed seeing the Eiffel Tower and Mona Lisa in France too. Seeing the historical sights in Rome and swimming in the sea in Sicily was also really nice.In New York i enjoyed attending a Couch Surfing Meeting and seeing Central Park.

In Serbia, i enjoyed attending the Guca Music Festival, seeing a fortress in Belgrade and monasteries in the surrounding area.

In Argentina, i met my family from there for the first time. I saw live rock and reggae music, attended a family members friends birthday party and then the disco in Buenos Aires. I tasted some of the amazing food and also beverages too. A great experience overall.

In 2012, I went to Portugal,which was a great experience. I had my first cable car ride, watched a football derby between Benfica and Porto, watching live fado music twice and staying out all night in Lisbon and getting the first train back to a neighbouring town where i was staying.
In September 2012, I went to Spain, saw the historical sights in Madrid and visited Salamanca, where i saw bulls at an animal market, saw the beautiful scenery and enjoyed tasting amazing spanish food and hospitality from my Spanish friends family. In Greece, I enjoyed the Acropolis and the museums, as I love history.
In Feb 2013 I went to Amsterdam with friends from Italy and Brazil. I enjoyed seeing the canals, playing pool, having beer in irish bars, visiting another city for a day trip and hanging out with my friend and her family.

In July 2013 I went to Norway with friends. It was great going to the beach when it was 30 degrees in Norway and also eating some local foods in the mountains.

In September 2013, I have spent some time with my family in Argentina again and will see what life is like in Buenos Aires.

In Feb 2014, i went to Krakow Poland. Was great seeing around Krakow, trying some traditional polish beer, enjoying friendly people and learning about the culture.

In June 2014, i went to malta with my Bolivian friend,, enjoying the historical monuments, eating sword fish and swimming in the blue lagoon.i met couch surfers from malta, mexico, germany and korea.

In july 2014, i went to paris, visiting old friends from scotland, france and brazil.

In September/october 2014, i went to taiwan, japan and hong kong again. In taiwan, i met old friends, met couch surfers and tried indignous foods. In japan, i went to tokyo, tried different foods, saw sudoku crossing, went to museums and saw echo park. In hong kong i saw the protests, tried dim shum, and went to some museums.

In october 2014, i went to tullimore in ireland, with friends.

In February 2015, I went to visit argentinan, spanish and italian friends in madrid, salamanca, malaga and milan . I went to berlin in april with my aunt and enjoyed a lot, as i had wanted to go to Germany for a long time.

I went to Puliga Italy in July 2015 for a friends wedding and had a fantastic time there, trying amazing sea food and also visiting Salerno. In September 2015 i went back to Malta with one Spanish friend and really enjoyed it.
In november 2015 i went to cyprus with one polish friend, great weather, swimming in the sea, fantastic food and people.

In April 2016 I went to Vienna with my Aunt and Uncle which i enjoyed a lot, seeing Freud's house, enjoying nice food/wine and seeing the Hapsburg Summer Palace, as well as celebrating my Aunt's birthday.

In June 2016, I went to Andaluisa in Spain, where i enjoyed spending time with friends in Malaga, Corduba and a small village where i stayed with my friends family and picked olives from land there.

In October 2016, i went back to Sicily and saw Mount Etna.

In feb 2017 i went tenerife, enjoying the museum of history and man in the capital and going to a water park for the first time.

In april 2017 i went to budapest hungary, i took a boat on the danube and tried goulash.

In june 2017 i go to the basq country in spain to see friends.

In sept 2017, i went to barcelona and enjoyed a lot. At the end of september, i went to canada with my polish friend izabella, saw my great uncle in vancouver, visited vancouver island and did hiking in alberta.

In May 2018, I went to Prague and enjoyed trying the beer and seeing the local sights and trying the food.

In June 2018, I went to Tuscany, Italy. I enjoyed seeing the cathedral in Florence, spending time in mountain villages, swimming in a lake for the first time and trying wine tasting.

In July 2018, I did a trip with my Spanish friend Eva through the north of Spain by car, which was amazing.

In October 2018, I went to Mallorca and enjoyed catching up with one old friend from couch surfing, practicing Spanish, enjoying the sunshine and the cathedral in Palma.

In Feb 2019, I went to Ancona Italy and visited my old flatmate, exploring some ancient caves. In April 2019, I visited Lyon France and swam in a lake beside Switzerland. In may 2019, I visited warsaw with my aunt and uncle. In June 2019 I visited gran Canaria and met a couch surfer there. In July 2019 I went to malaga and practiced Spanish and met up with old friends.

In September 2019 I visit Sardinia. In October 2019 I go with my friend Eva to Geneva Switzerland. In November I visit Bologna Italy. In January 2020 I visit Argentina to see family again. In march 2020 I will visit Copenhagen, Denmark

I can help people if they want to know more about Scottish culture and history. I'm happy to meet up to show you around round the city, have a chat, a beer or a cup of coffee.
I can share my Scottish accent for definite and talk about my travel experiences or whatever you want.

I'm interested in learning about different countries and cultures generally.

I like to learn more Spanish when there is the opportunity.

I can share Scottish culture, i know something about the geography and history of Scotland and UK generally.

I can share recipes, travel stories and music from different countries.