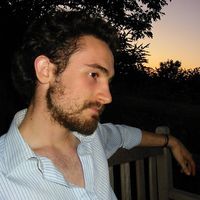 To free fonts in all the world's writing systems

Peculiar playful gravitas. I get excited about complex and weird ideas. I laugh loudly. Think quietly. Love computers and people, too.

I like stuff with anarchic playfulness, like Discordia and Daoism - stuff that's not hierarchic or institutionalised. I had enough of that stuff in school.

One of my all time heroes wrote something I like a lot:

"Yet my most cherished advice to all friends is the following: learn to enjoy your contingent present, don't be obsessed by the future. Carpe diem, and enjoy the current emotions: a starry sky, a fresh wind, the shells on the seashore, your love at your side in the night, a long talk in the evening twilight with a friend, the smile of your kids. Substituting *that* with a TV - or a computer screen - is a very poor bargain... that is one of the few things I am now pretty sure of."

When I had a home in the UK, I hosted people as much as possible.

When I was in my 20s I did quite a lot of trips, and was always either couchsurfing, or staying with friends. But in my 30s I've tended to use AirBNB a lot more, traveling with a girlfriend or my wife, or being on a business trip, I'd otherwise be like "hey yo just going to sit here on my laptop and not talk to anyone for 3 days..."

Now I live in NYC and have no room for hosting.

But, of course, I'm still always telling people about the project.

I've traveled all over the world via CS and today I am happy to say that I've met some really great friends from this community!

I love music, but, eh, who doesn't? The fact is, I just don't feel that strongly about it. I used to listen to BBC Radio 1 or 2 or 4 when I lived in the UK, but I sold my car (and very nearly everything else) in 2009 and now I basically don't listen to music any more.

Mostly I like hyperactive and energetic music, whatever genre. I'm so easy going, I like most things.

"The problem with rock and roll is that the generation that created it is now the establishment. Rock pretends it's still rebellious with its video posturing, but who believes it? The stars are all either 45-year-old zillionaires or they endorse soft drinks! The 'revolution' is a capitalist industry! Give me a break! Fortunately, I've found some protest music for today's youth. This stuff really offends Mom and Dad: Easy-listening Muzak. I play it real quiet, too."

I am not ashamed to say that my most favourite films are big Hollywood films, the ones that I saw as a kid growing up in suburban southern England: Back to the Future (must have seen it a hundred times as a kid), Terminator 2, Indiana Jones movies...

When I was a teenager, Fight Club came out and had a big effect on me. You are not the car you drive. I saw and loved everything Kubrick did in art school, and so many films that once a tutor commented on it. "I'm 19 years old. I watch as many films as I want!" haha

I also developed a love for silly comedy and political comedy, Tommy Cooper and Bill Hicks.

I rarely read fiction books, for me real life is more interesting. I used to bring Calvin &amp; Hobbes books into reading class instead of 'real' books. The last book I read I thought was really excellent was Accelerando by Charlie Stross. Once I went out and bought all of Chuck Palanuick's books after reading Fight Club online. But instead of fiction, I read a lot of curious non-fiction stuff from all over the web - Wikipedia is insanely great!

My favorite authors of all time are Eckhart Tolle, Marshall Rosenberg, John Taylor Gatto, and Marshall McLuhan. Look 'em up! :-)

I was a fussy kid, but not any more. My favourite is probably Dos Toros burritos in New York City. I like to eat vegetarian and vegan food a lot, even though I'm not.

In 2008 I saw the "Surfwise" documentary, bought Doc Paskowitz' book, and was inspired by his CRAZY WRITING STYLE to improve my diet a lot and for a while I exercised daily. In my 30s I've often let myself down, what with all the traveling - day pass access to gyms adds up fast. In 2011 I picked up the whole 'Paleo diet' thing again from my friend Owen, and the 'Slow Carb diet' from Andy, but didn't stick with them. Learning about the molecular effects of bread, rice and pasta makes the invisible threads of civilisation perceptible, but, whatever.

In June 2007 I was involved in a nasty car accident. Unexpectedly, and by total luck, I survived without any serious injuries that are likely in such a tragedy. This effected me in profound and subtle ways.

"You have to know, not fear, that some day you are going to die. Until you know that, and embrace that, you are useless."

I free fonts: I've staked a career on advancing the role of computers in maintaining a free society, and specifically, making typographic design tools freely available.

Before that, I was a student of the idea of "information design."

I read a lot about the history and nature of compulsory state schooling and probably talk about that stuff too much.

I often like to chat about the collapse of industrial society, which I think can happen quickly as peak resource extraction collides with capitalism's requirement for growth. I dabbled a bit with Transition Towns and read some Permaculture and stuff like that, but I'm mostly focused on liberating typography and deschooling.

I co-founded the www.craftingtype.com workshops, a non-profit activity where anyone can learn how to design their own typefaces in just a few days.