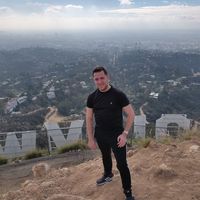 I’ve caught the travel bug about 2 years ago and have been trying to try new experiences and travel the world. I’m a huge foodie and part of traveling is trying the local cousine.

I'm trying to travel as much as possible and learn about new cultures and make connections around the world while meeting like minded travelers.

Some mainstream but mostly 80s and 90s as well old school house and techno. My favorite movies are the star trek films and next generation series. I’m a sucker for 80s horror.

I've climbed the snake path at Masada in Israel with scorching summer temperatures and last year I went parasailing in key west which was terrifying but also beautiful.

I can be a great drinking buddy lol.