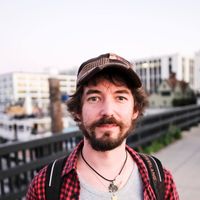 ***If you want to stay with me, please click on MY HOME above and read carefully***

"You haven't been to London if you haven't stayed with Dave" - Tosha, Surfer and Traveller.

I want to see the world through my own eyes, untainted by TV, radio or newspapers...

"Of all the gin joints, in all the towns, in all the world, she walks into mine.." - from Casablanca, one of the greatest films of all time.

...one day I want to learn to play the trumpet

...I've no idea where my life's taking me, but I'm keeping my eyes peeled the whole way...

...in other news, from birth until some time in the 1990's I tried growing up. In 1999, taking a gap year, I lived in Blackburn, Lancashire, whilst volunteering at a homeless shelter. In 2000 I moved to Manchester to study Human Geography, returning to London in 2003. I spent from then until 2010 working various jobs and being the bassist in the band Hatcham Social, releasing our debut album in 2009. In October 2010 I left England to spend 6 months on the road; 3 months traversing across the USA from New York to San Francisco; 7 weeks in New Zealand exploring both the north and south Islands; 1 week in Fiji; a month in Australia, and finally a couple of days in Singapore on my way back home to London. In December 2012 I set off again, travelling through Thailand, Laos, Cambodia &amp; Vietnam. In May 2013 I arrived in Melbourne, Australia, where I lived for 10 months. I returned to London in March 2014 to start a new job, and another new beginning, in my home town.

My favourite Hatcham Social song to play (that's me playing bass: https://www.youtube.com/watch?v=wzH8KjJlIRg
My recent short film: https://youtu.be/RhRtHFSEOIk
My poem about the Northern lights (seen when Couchsurfing in Norway): https://youtu.be/wjcl-2k87fM
My photography: http://davidsaulfinebergphoto.co.uk

I want to share things. Exchanges. Smiles. Bike rides. A gesture. A glance. A moment. A stare. A word without speaking. A song without singing. A thought without thinking. I like to couch surf for the experience of seeing a city, town or village through the eyes of someone who lives there. I'd prefer to stay a few days and take things in than to speed through a different city every day. Conversely, I like meeting couchsurfers in London to see it through the eyes of someone who doesn't live here.

I do not smoke.

I shower regularly. Daily where possible.

I eat most things. Though I once tried fermented whale meat, and wasn't too keen.

I spent October 2010 to April 2011 travelling through the USA, New Zealand, Fiji, Australia &amp; Singapore. I surfed many couches and met many wonderful people. On returning to London I met up with fellow CS-ers (Londoners and travellers), attended a few meetings in London, and surfed some more in Europe (and beyond). I helped arrange a regular(ish) Film Club (http://welcometofilmclub.tumblr.com/) for anyone living or passing through London, as well as setting up various other events that interested me. In 2012 I left to visit South East Asia, before arriving in Melbourne in May 2013 where I lived for 10 months. Now I'm back in London, and seeing where things go from here.

My CS experience so far:

London (May 2016)
I hosted Anna and Tatyana from Russia

London (November/December 2015)
I hosted Dickson from Malaysia
I hosted Maksi from Austria
I hosted Kamila &amp; Ewa from Poland
I met up with Verónica from Spain
I hosted Klára from the Czech Republic

Lithuania (June 2015):
In Vilnius I met up with Goda to visit the cultural festival.

Morocco (January 2015):
In Merzouga I was hosted by Mustafa
In Marrakech I was hosted by Marie who was staying with her friends Amman.
I travelled for a week with Salmane, Paul &amp; Natasha and Marie.

Australia (October 2013):
In Adelaide I was hosted by David.

Singapore (April 2011):
In Singapore I was hosted by Matthew &amp; Arun.

England (since 2003):
In Manchester I have been hosted by Stefan on many many many occasions.

"Knowledge is knowing that a tomato is a fruit; wisdom is knowing not to put it in a fruit salad." - Brian O'Driscoll, rugby player.

I'm constantly surfing the net for everything and nothing in particular. Wikipedia is my bible. Google is my dictionary. But nothing can replace the feel of a good book.

"Life is what happens whilst you're busy making other plans." - John Lennon, musician.

"Tell me and I forget. Teach me and I remember. Involve me and I learn." - Benjamin Franklin, polymath.

"Eighty percent of success is showing up." - Woody Allen, jew.

"Some things are worth living for. You don't take your money to heaven when you die." - Eric Cantona, Frenchman.

"Life is too important to be taken seriously." - Oscar Wilde, Irishman.

"Kill all my demons, and my angels might die too." - Tennessee Williams, playright.

"We live everything as it comes, without warning, like an actor going on cold." - from The Unbearable Lightness of Being, a book.

"The joy of life comes from our encounters with new experiences, and hence there is no greater joy than to have an endlessly changing horizon, for each day to have a new and different sun." - Christopher McCandless/Alexander Supertramp, itinerant.

Some of my favourite books are The Call of The Wild &amp; White Fang by Jack London / Making History by Stephen Fry / Catcher in the Rye by J D Salinger / To Have and To Have Not by Ernest Hemingway / Down and Out in Paris and London by George Orwell / The Great Gatsby by F. Scott Fitzgerald / Alone in Berlin by Hans Fallada / The Rum Diary by Hunter S Thompson / The Diving Bell and The Butterfly by Jean-Dominique Bauby / The Hobbit by J.R.R Tolkien / America Unchained by Dave Gorman.

Playing live with my band Hatcham Social at South by South West festival in Austin, Texas, USA and then swimming in our roof top pool at the hotel.

Skydiving from 16500 feet above the Abel Tasman National Park in New Zealand.

Staying in a cave with some bedouins (Khaled, Ghassan &amp; Ghassab) in the Jordanian desert, sitting by the fire, looking up the stars, drinking arak.